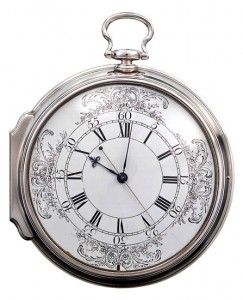 Accurate navigation at sea has always been critically important but, until the invention of the marine chronometer, it was extremely difficult, if not impossible. Latitude was straightforward to measure; the problem was longitude. In 1714, some 200 years after sailing ships had first circumnavigated the world, the British government announced a £20,000 prize – worth almost £3m today – for anyone who could solve the problem.

The key to it was making a clock that could somehow keep accurate time despite being pitched around by wind and waves and exposed to great variations in temperature and humidity. John Harrison, a self-taught clockmaker, devoted his life to the task.

He began building his first attempt in 1730, but 30 years went by before he cracked it. The H4 timepiece lost just five seconds between England and Jamaica and contained numerous horological innovations. After lengthy disputes with the Board of Longitude, Harrison finally got his reward in 1773. His clocks were carried by the likes of James Cook and William Bligh, and safe long-distance travel was now possible.

British surgeon Sir John Charnley pioneered the idea that a human hip joint could be replaced. He designed the joint and, in 1962, performed the first successful hip-replacement operation, at Wrightington Hospital in Lancashire.

Charnley’s design used a femoral stem and ball made of steel and a hip socket made of Teflon – later replaced with harder-wearing polyethylene. Both parts were glued to the bone using an acrylic bone cement. Charnley also introduced important new improvements to surgical procedure to reduce the chances of infection: clean air enclosures, suits for the surgical team that covered their entire bodies, and a system of sterile instrument trays. He also taught surgeons from all over the world.

Although many improvements have been made since – to the design of the joint, the surgical method and the ways of fixing the replacement joint to the bone – Charnley set the standard.

Today, 80,000 hip replacements are performed in Britain each year, and almost a million a year worldwide.

Michael Faraday was employed by the Royal Institution, where he investigated the connections between electricity, magnetism and motion. In 1821, he demonstrated electromagnetic rotation for the first time. A free-hanging wire was dipped into a pool of mercury that had a fixed magnet in it. When an electric current was passed through the wire, it rotated around the magnet – the electricity produced a magnetic field around the wire, which interacted with the magnet in the mercury. This was the world’s first electric motor.

Ten years later, Faraday made an incredible intellectual leap: if electricity and magnetism could create motion, could the reverse be true – could motion and magnetism create electricity? Faraday proved it could with the world’s first electric generator, a copper disk that rotated between the poles of a magnet and generated a current in a wire attached to it by a spring.

Charles Macintosh, an amateur chemist, was experimenting with coal-tar naphtha, a chemical waste product, and realised that it was a powerful solvent that could make a solution from rubber. He coated a thin fabric with this solution but, because it was so sticky, he sandwiched it between two layers of the fabric to make a practical waterproof material.

His family company started selling the coats as the “Mackintosh”. But they had a tendency to melt in hot weather. Another British inventor, Thomas Hancock, later improved the product and was made a partner in the firm.

FURTHER READING : Check out our article on Rubber