WHO WERE THE CELTS

The word comes from the Greek keltoi, which was used by the Greeks to describe the ‘barbarians’ who lived to the north of their lands in the Mediterranean. 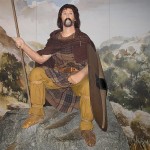 We have no idea what the people of the Channel Islands called themselves, but we can be sure that they spoke a Celtic language. They also used pottery, metalwork and other objects belonging to what we call a Celtic style or tradition.

The Celtic world stretched from the south-west of Spain to the north of Scotland and from Ireland across central Europe as far as Galatia (modern day Turkey).

The Channel Islands occupied an important position at the entrance to the English Channel and throughout the Celtic and Roman periods, the location of the islands exerted a strong influence on their political and social development, in relation to each other and to the wider world.

During the first millennium BC, Guernsey and the other Channel Islands were inhabited by people we recognise today as ‘Celts’. The precise identification of the ancient Celts is controversial. Celts were not one homogenous group, nation or tribe – rather a culture spread across Europe. One thing we can be almost certain of is that the people who lived here did not think of themselves as Celts.

Up until the mid 1980’s it was thought that the Roman Empire had completely passed the Channel Islands by as no real record of Roman settlement had ever been found. It was concluded therfore that the Channel Islands had remained largely Celtic for the duration of the Roman occupation of Gaul. However since then there has been a veritable explosion of Archaeological evidence to suggest quite the opposite – that Guernsey was very much a part of the Roman World.

The archaeology seems to be saying that Caesars Gallic Wars in the 50s BC drove many of the mainland Celts ‘offshore’ to Jersey where a large number of buried Celtic coin hoards dating to this periosd have been found. Curiously though no hoards have ever been found in Guernsey. This plus the fact that there is much more evidence of a Romanised occupation in Guernsey than Jersey has lead to the untruguing hypothesis that Guernsey was more Romaised at this time than Jersey deterring fleeing Celts from seeking refuge there. If this is true then it points to Guernsey being a part of the Roman world long before Caesar’s Legions conquered Gaul.

In this article we look at the interface between these two worlds – The Guernsey Celts that became Guernsey Romans.

Before the Romanisation of Guernsey began in the first century BC the people living in Guernsey were Celtic both in culture, technology and language.

There is much evidence for the Celtic society in Guernsey most notably from grave goods, warrior burials and the ‘jewel’ in the Celtic crown … The King’s Road Warrior Burials.

The largest area of Celtic settlement we know of on Guernsey lies to the east of King’s Road, on the outskirts of St Peter Port. It was first recognised in 1980 when a new school boarding house was built. Since then, archaeological excavations have taken place in several different areas along the road, revealing evidence of settlement and burials spanning several centuries. 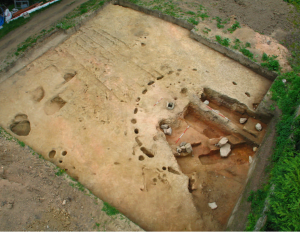 In 2005 a large Celtic roundhouse, about 8m in diameter, was excavated here with postholes marking the outline of the structure clearly visible, cut into the gravelly natural rock. The pottery found within the roundhouse suggests that it dates from the early or middle Iron Age, perhaps the 6th-5th centuries BC.

It is highly likely that the Guernsey Celts would already have been friendly to the Romans before they conquered the nearby coasts of Gaul in 56BC. It’s known for example that ships were stopping here carrying Roman pottery and wine possibly as early as 120BC. The island was on the route taken by merchant ships sailing up the Atlantic Coast of Gaul and into the Channel. Roman objects found in the islands came from modern France, Germany, Britain, Spain, Italy, North Africa and even Palestine and included olive goods such oil and fish sauce carried in amphorae. Roman maps suggest the name they attrubuted to the island at this time was ‘Lisia’.

The Romanisation of Guernsey

Whilst the Romanisation of Guernsey and her people was undoubtedly well under way by the mid first century BC it was Julius Caesar’s conquest of nearby Gaul between 58 and 50 BC that would propel Guernsey firmly into teh Roman world.

In 56 BC Armorica, the region in north-western Gaul which included the Channel Islands, was subdued following the defeat of Viridovix, the ruler of the tribe known as the Unelli. Although these islands technically came under Roman rule from that date, the reality must have been much more complicated. It is likely that there was continued resistance to Roman rule in some quarters, while other areas adapted much more readily to the new political system.

Although as already mentioned it is likely that Guernsey adopted a pro-Roman position from an early stage, perhaps as far back as the late second century BC. when the island began to receive amphorae and the first luxury items traded from Rome. The local population was taking advantage of the location of what is now St Peter Port – the best natural harbour in the Channel Islands – which served as a useful ‘refuelling’ point for fresh water, and perhaps for salt for preserving foodstuffs.

Jersey, in contrast, remained more ‘Celtic’. The population were less willing to engage in trade with Rome. Access to the island was hampered by the lack of an equivalent to St Peter Port, and even more difficult rocks, tides and currents to negotiate. The contrast between the two islands is demonstrated very clearly by the presence of more than a dozen Celtic coin hoards on Jersey, containing more than 90,000 coins compared to five Celtic coins found on Guernsey! 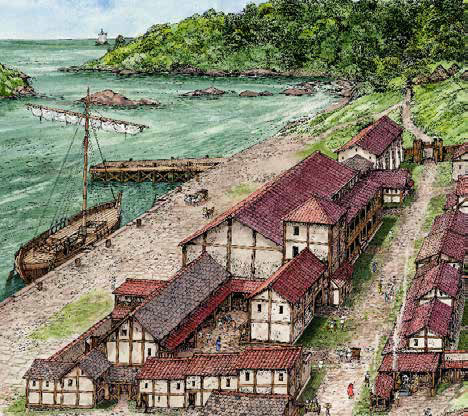 Roman-style Buildings were constructed on the site of modern St Peter Port from the first century AD, although islanders had already been living there for at least 2,000 years. Most of the people living there would have been locals rather than Italians, but they soon had tastes for Roman food and luxuries.

Remains of Roman buildings have been found at La Plaiderie and in the Bonded Store, beneath the Markets. With the best natural harbour in the Channel Islands it became an important port-of-call for Roman shipping. Some Roman sites have also been found in Jersey, but it does not seem to have been as important to the Romans. In all Guernsey would be a part of the Roman Empire for over 400 years.

Testament to St Peter Ports role as a centre of commerce was confirmed with the discovery of a Celtic/Roman ship in 1981, later nicknamed ‘Asterix’.

It’s estimated that Asterix had caught fire and sunk around 280 A.D. whilst in the Roman harbour. The ship had been carrying pine tar in blocks in its aft hold. These melted in the fire, trapping over a thousand objects from the burning ship. When the ship sank, the fire was put out and the tar set in a solid mass. This stroke of luck meant that timbers at the stern were preserved in such detail that the marks of saws, axes and other tools could still be seen on them. Trapped objects included roof tile and pottery from Algeria, Spain, France and Britain. Even leftover food was stuck in the bilge at the bottom of the ship.

‘Asterix’ sank at a time of growing trouble for the Romans.

The Western Roman Empire suffered increasing crises during the third and fourth centuries. ‘Barbarians’ such as the Saxons raided the eastern borders and coasts and there were frequent rebellions by generals. Forts were built to guard the coasts of Britain and Gaul (France).

A small Roman fort was built in Alderney, probably as a base for naval patrols against pirates and raiders. At some time between AD400 and AD500, Guernsey ceased to be controlled by Rome.

Celtic roundhouses of the style found at King’s Road were in use at this time on the island.

Celts led by Brennus of the Senones (a Gaulish tribe originating from northern France) sack Rome.

The great Greek geographer Pytheas of Massalia (modern-day Marseille) makes a voyage of exploration to northwestern Europe and is the first recorded mariner to circumnavigate Britain.

The site included a least one round house and a small cemetery. Excavations have found three men buried with long iron swords at their sides and a woman with fine bronze circlets around her neck and arm.

Rome defeats Carthage in the Second Punic War – also referred to as The Hannibalic War by the Romans.

Carthage lost Hispania forever, and Rome firmly established her power there over large areas. Rome had taken a key step towards what ultimately became her domination of the Mediterranean world.

Rome takes Transalpine Gaul (Southern France) to secure the land route into the new colonies of Iberia and Lusitania.

A Warrior class of Chieftans continues on in Guernsey with further Celtic Warrior burials dating to 75 B.C.

Spartacus (111–71 BC), a Thracian gladiator, along with the Gauls Crixus, Oenomaus, Castus and Gannicus, lead a major slave uprising against the Roman Republic.

Between 50-58 B.C. Julius Caesar leads his legions in the conquest of Gaul. Although by this time Roman influence in the island will have already been felt the Roman Empire is now literally on Guernsey’s doorstep.

With the surrender of the last Amorican tribes in mainland France Guernsey can be considered to have formally come under Roman rule.

Julius Caesar is assassinated. There then follows a period of civil war until Caesar’s adopted son Augustus becomes the first Emperor. (see our article Beware the Ides of March : The Great Caesar is Assasinated)

Unrest in the Channel Islands

The period of unrest in the Roman world extends to the Channel Islands as evidenced by the burying of coin hoards in Sark and Jersey. (see our article Ancient Celtic offshore Banking)

The First Emperor of Rome

In 525 an Italian monk, Dionysius Exiguus, was commissioned by the pope to produce what we now know as the Anno Domini dating system. However an error made in the original calculations means that Jesus was actually born in 6 B.C. rather than 0 A.D. You can read more about this rather curious fact in our article Anno Domini – Origin of the Western Calendar

Pompeii and Herculaneum are destroyed by the eruption of Mount Vesuvius.

Wars, rebellions and barbarian invasions occur creating a time of ever increasing instability. On average each Emperor rules for just 4 years before being assasinated.

Gaul and Britain break away from Rome as the 'Galic Empire'

Gaul and Britain break away from Rome as the ‘Galic Empire’

A Greek Coin Hoard is buried at Jerbourg.

Rome Embraces Christianity as a Religion

Emperor Constantine attributes his Victory over Maxentius to the Christian God. A year later in 313 he issued the Edict of Milan, which, for the first time, made Christianity legal.

A Roman Fort is Built in Longis Bay, Alderney

A Roman fort at the Nunnery, Alderney, approximately 40 metres square, is built.

It has rounded corners with semicircular bastions that may have been designed to carry bolt-shooting engines (ballistae). Onginally it had a massive square tower in the centre, with walls 2.8 metres thick. It is believed that it was constructed to protect Roman naval patrol ships based in Longis Bay. (See our article Roman Alderney – Ruin Found to be Roman Fort)

The Romans abandon Britain and Rome is sacked by the Visigoths.

Gaul is lost to the Franks

Rome loses control of Gaul to the Franks

Guernsey and the Frankish Kingdom