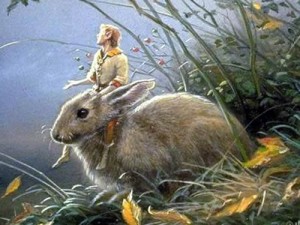 Many years ago, on a beautiful sunny day two farm workers were ploughing a field near L’Eree. Both men were great friends who enjoyed their work; they lived in adjoining cottages near the beach, but preferred to work on the land rather than earn a living from the sea. On this particular day they had risen with the sun as they always did so they could to get the field well ploughed in the daylight.

Suddenly the plough stopped dead. Even their combined strength and with that of the oxen it refused to move it. “There must be a stone in the ground” said one of the men, and they began to excavate the earth very carefully. Farming equipment was expensive, and they could ill afford to damage the plough. However, there did not seem to be any stone or other object blocking the way. Then they noticed an old iron kettle in an adjoining furrow. It had a large hole in the side, and was obviously broken and of no practical use. “We’d better move that” said the other man and went to pick it up.

To their amazement, as he picked up the kettle, both men heard a little voice asking them to get it mended, and to put it back in the exact spot. They were kindly men so they called at the nearest blacksmith to have the kettle repaired. They then put it back exactly where they had picked it up. Time was hastening on and with it the daylight so in their return they were very pleased to find that their plough now moved without difficulty, and they continued on ploughing.

Despite being both countrymen they had not thought at the time of the Pouques, the Guernsey fairies, who were known to always repay a any kindness shown to them. When the plough again stopped abruptly, the men were dismayed, but then noticed a neatly tied bundle in the furrow where the kettle had been. On opening the bundle they found a newly baked cake still warm from the oven, and a welcome bottle of cider. The same little voice told them to eat and drink without fear, and thanked them for getting the kettle mended, also saying that a kind action is always rewarded. 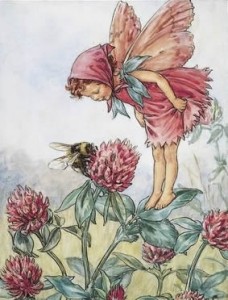 One of the oldest Guernsey legends tells of two fairies, Le Grand Colin and Le Petit Colin, who used to bake at night using the furze oven of a local couple, Colette and Jacque. Colette had become aware of their existence but did nothing as every morning in way of recompense, there was a lovely white loaf, Guernsey gâche and sometimes even a bean jar on the table.

However, when she told her husband he was not so tolerant and tried to catch the fairies. Once the two Colins found out, they were very angry and marched out of the cottage, banging the door behind them and never again was there free food on the couple’s table.

In another story of mortals helping the Pouques. To the south of the Parish Church of St Pierre du Bois, there lived at one time a Guernsey family who had a very good relationship with the fairy folk in the area. Frequently at night little elves would approach the householder, and ask politely if they might have the loan of a hand cart. This request was never refused because it was always accompanied by a promise.

“Lend your cart now, I pray, To go to Saint Malo, To fetch stones away. Should wood for wheels Or anything lack, We’ll make it all right Before we come back.”

The cart was always returned unharmed, or if by any chance some damage had been done, the owners found, to their delight, that this had been repaired with pure silver. In both of these legends the Pouques showed that they always repay a kindness shown to them by mortals.

Legend has it, there were two different types of fairy – those who invaded the island and the indigenous species known as Pouques, who inhabited Guernsey.

The fairies that invaded the island were generally not as pleasant as they had a tendency to steal local women. One fairy prince from across the seas put a spell on a beautiful local girl, Michelle, and took her away to fairyland, leaving behind a magical pink lily to comfort her family. The flower, now known as Nerine sarniensis or the Guernsey lily, is to be seen blooming in Island gardens in October, as well as the Nerine Festival, held at Candie Gardens.

It is said that Guernseymen are shorter than average because of the fairy blood running through their veins, which also has made them polite, industrious and helpful. Local witches, benefited too as they no longer needed broomsticks to fly because of their inherited invisible wings.