In 2008 Guernesiais was celebrated with an issue of stamps

Guernsey Patois, or Guernesiais as it is known locally, is a very ancient tongue indeed. A descendant of old Norman French and developed in splendid isolation within the island it has become a true ‘language apart’.

The loss of Normandy in 1204 by the then English King John and the subsequent election by the Channel Islands to stay loyal to the English crown meant that the Norman French spoken by the islanders was destined to follow a different path to that on mainland France.
[To read more about 1204 and the split from Normandy refer to our article called “1204 – The Birth of Guernsey’s Constitution“.] 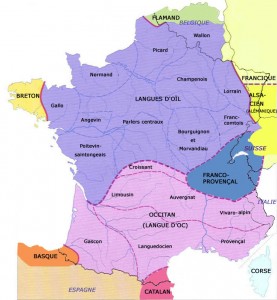 The Langue d’Oil within Medieval France

Guernesiais is the descendant of a variety of tongues. It has come down from the old Langue d’Oil of Northern France which itself was a mixture of Low Latin, Gaulish and Frankish. Of the five divisions of this Langue d’Oil spoken in the whole of France it was the strongest. It held its supremacy until 1515 when Francis I felt secure enough on his throne to declare the Parisian version of the Langue d’Oil to be the official language of court and country. From that time to this the Ile de France dialect became known as Standard French so that, even in Guernsey, it is referred to as le bouan Francais or “good French” as if its own Norman French was just a bastard version of it.

Both Norman and Standard French are descended from the same parent, retaining the same family affinities and relationships. However except for a very few remote and scattered regions on the Cotentin where some vestiges of the language can still be found, only in the Channel Islands does this ancient Norman-French version of the Langue d’Oil still survive with some vigour. It is the old native speech of the Guernsey people and gives a sense of tradition and belonging to those who speak it. If it is allowed to become extinct an irreplaceable part of our rich Guernsey heritage will have been lost for ever and we would be failing, not only those who came before us, but those who will come after us.

To this end today in Guernsey there is a (limited) attempt to teach school children some of the basics of Guernsey French. This coupled with the publication of dictionaries, books & tutorials by the local language experts Dr Harry and Hazel Tomlinson is going some way to keeping this rich local tradition alive.

Below is an example of written Patois along with phonetic pronunciations English translations.

Along with Hazel and Harry Tomlinson, the BBC have created a series of online lessons in Guernsey French.