Home » General Interest » Half Animal, Half Plant and Totally Tasty on Toast – Fungi

Half Animal, Half Plant and Totally Tasty on Toast – Fungi 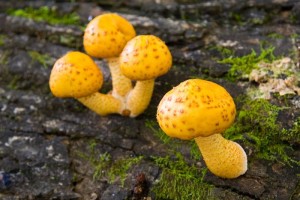 When you eat mushrooms à la Grecque or a truffle omelette, you may have thought that you are eating a vegetable. But you aren’t. Fungi (which can be pronounced ‘funj-eye’ rather than ‘fun guy’) were thought for many years to be plants, members of the vegetable kingdom with a few peculiarities. But modern science has shown that they are not.

Ergot, a fungus that contaminated rye in the Middle Ages, led to bouts of madness

More than 56,000 species have been described, from nasty diseases that form between our toes to the mushrooms that are good on toast, and since the advent of humans, fungi have made their mark on our history in a number of ways. Some believe that the legendary ‘Pharaoh’s Curse’ was due to a long-lived fungus that lay dormant in Egyptian tombs until they were opened by archaeologists. Ergot, a fungus that contaminated rye in the Middle Ages, led to bouts of madness; in the 19th century, potato blight, another fungus, destroyed the lives of hundreds of thousand of Irish who starved to death or emigrated. And phylloxera, a fungus on grapes, dealt a devastating blow to the French wine industry.

one fungus, Penicillium notatum, was the source of the world’s first and most widely used antibiotic

It’s not all bad though, fungi have also contributed to the enjoyment of mankind. Bread would not rise without them; many fungi are edible in themselves; others turn sheep’s milk into Roquefort cheese, or cottage cheese into Camembert. And one fungus, Penicillium notatum, was the source of the world’s first and most widely used antibiotic.


So what are they?

Scientists no longer rely on the appearance of a lifeform to fit it on to the tree of life. It was the development of sophisticated DNA analysis which revealed the differences between fungi and plants. The cell walls of fungi don’t use cellulose, as plants do; and the chemicals that do the work of digestion are different from those in plants.

there are 3 biological kingdoms – animals, plants and fungi

The results of DNA analysis on fungi have shown that there are three biological kingdoms – animals, plants and fungi – which separated out from a common ancestor about a 1,000 million years ago. The fungi split in turn into at least 8 distinct lines, from aquatic forms called chitrids to baker’s yeast, penicillin, plant rust, mushrooms and toadstools. Like plants and animals, fungi come in a bewildering variety of forms, from the microscopic, like the yeasts, to the very large.

Fungi, as living organisms, have evolved in the same environment as plants and animals and often carry out tasks that are essential to the survival of their neighbours. One fungus, for example, lives among certain grasses and monitors the health of the individual blades. If one blade of grass seems to be ailing in some way – short of water or food – the fungus will build a bridge between that blade and an adjacent healthy one, and pump over a fresh supply of water and food. Another fungus has a three-way relationship with certain trees and with squirrels. The fungus grows in the tree’s roots and enables it to gather nutrients from the soil. At the same time, it produces mushrooms which are eaten by squirrels who spread the fungus to other trees via their faeces.