Living with the Enemy – Jersey’s own “Anne Frank” 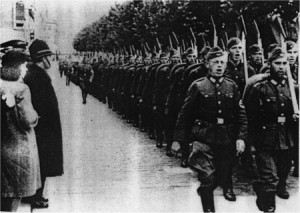 Much is sometimes made of the lack of armed resistance to the Germans by Channel Islanders, often by those ignorant of the size of the islands and their geography. However there are many stories of other types of active resistance against the occupying forces. Indeed many islanders lost their lives, executed by the Germans for their opposition. In this article we look at one such act which has parallels with the Anne Frank story in the Netherlands.


On November 23rd 1943 the following notice appeared in the Jersey Evening Post:

The German authorities are looking for Miss Hedwig Bercu typist, of no nationality; 24 years of age… She has been missing from her residence since November 4th 1943, and has evaded the German authorities. Any person who knows the whereabouts of Miss Bercu is requested to get in touch with the Feldkommandantur 515, who will treat any information with the strictest confidence. Anyone concealing Miss Bercu or aiding her in any other manner makes himself liable to punishment.


Hedwig Bercu was born in Austria and had moved to Jersey prior to the war. She had been registered as a Jew in October 1940, but despite this she had managed to gain employment as a translator at a transport depot. During the course of her job she had access to petrol coupons, some of which she took and passed on to Jersey doctors. When a lorry driver threatened to inform on her, Bercu went on the run – knowing that as a registered Jew her life would be in danger.

She found shelter with Dorothea Weber of West Park Avenue in St Helier and, thanks to her kindness, remained there until the liberation 1 year and 7 months later. They were helped out by a German officer who ensured that they had sufficient food.