Home » Science » How Did Something Come From Nothing?

How Did Something Come From Nothing? 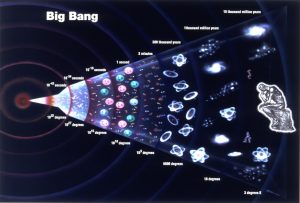 Questions do not come much deeper than this and until the 1970s only theologians and philosophers felt able to take it on (plus physics students still in the bar at closing time).

At guernseyDonkey.com we don’t pretend to understand all of these things so in this article we give a (heavily) abridged and simplified explanation of what is a rather head-scratchingly complex theory – to say the least.

The first glimmerings of what has become the standard scientific response emerged in 1973, in a now-famous paper in the journal Nature, “Is the Universe a Vacuum Fluctuation?“. Its author, the physicist Edward Tryon, pointed out some curious features of our universe. For example, the total amount of positive energy locked up in cosmic matter matches (roughly speaking) its total gravitational energy, which is negative. In other words, the total amount of energy in the universe appears to be zero. Together with various other more technical properties, this led Tryon to suggest that the universe was created from nothing or, more precisely, what physicists call the vacuum state. The beauty of Tryon’s suggestion is that the properties of this vacuum state can be calculated, so the question of how “nothing” became “something” was opened up.

Since then, physicists have become convinced that the origin of the universe is inextricably linked to the properties of the vacuum state, from which it burst forth in a Big Bang around 14 billion years ago. Such spontaneous creation might seem like the ultimate conjuring trick but is entirely plausible (apparently).

Laboratory measurements have established the fact that sub-atomic particles are constantly popping in and out of the vacuum state all around us. The spontaneous appearance of something the size of the universe is less frequent of course but, crucially, is not impossible. If Tryon is to be believed, that is precisely what has happened.

Not surprisingly, not everyone is convinced – not least because Tryon was a bit cavalier in his definition of the universe. Strictly, it is not merely the things in it but also space and time as well and quite how these emerged out of nothing is still very controversial.

Given the rather odd asertion above that ‘Laboratory measurements have established that sub-atomic particles are constantly popping in and out of existence’ we felt it beholden upon us to try to explain, what is termed Quantum Fluctuations, further.

A quantum fluctuation is the temporary appearance of energetic particles out of empty space, as allowed by Heisenberg’s uncertainty principle. The uncertainty principle states that for certains pairs of related variables such as position/momentum or energy/time, it is impossible to have a precisely determined value of each member of the pair at the same time. For example, you can’t measure a particles position AND acurately know its speed or for the energy/time pairing a particle pair can pop out of the vacuum during a very short time interval. As an aside we should that that there is an extension of teh theory applicable to the “uncertainty in time” and “uncertainty in energy”. When the mass is very large like a macroscopic object, the uncertainties and thus the quantum effect become very small, and classical physics is applicable. Which comes as a huge relief, otherwise there’d be a chance that the chair you’re sitting on right now could just disappear at any moment!

However this still doesn’t satisfactorally explain why tiny particles (or fields) can pop in and out of existence, so we will need some further analogies.

Before we start it should be pointed out that quantum fluctuations are sometimes described as causing the “appearance and disappearance of two (or more) `virtual particles‘ “. This technical bit of jargon is unfortunate, as these things (whatever we choose to call them) are certainly not particles — for instance, they don’t have a definite mass.

[Left] : Normal intuition would lead us to expect that anything like a marble sitting in anything like a bowl would sit quietly at the bottom.
[Right] : But a quantum mechanical particle in a trap of some sort will have a position and motion that are constantly fluctuating. These fluctuations have energy; the motion-energy of a quantum particle in a trap is never zero.

if you put a marble at the bottom of a bowl, it will stay there indefinitely, as far as you can tell. That is what you’d expect, from daily experience.  And it would be true, in the absence of quantum mechanics. But if you put a very lightweight particle in a tiny bowl, or some other type of trap, you will discover it doesn’t sit at the bottom. If it did sit motionless at the bottom, it would violate the uncertainty principle — a principle which assures you can’t know exactly where the particle is (i.e., at the bottom) and how it’s moving (in this case, not moving at all) at the same moment.  You may think of this, imperfectly but usefully, as due to a sort of jitter which afflicts the particle and prevents it from settling down the way your intuition from marbles in bowls leads you to expect.  One useful aspect of this imperfect picture is that it gives you an intuitive idea that there might be energy associated with this jitter. 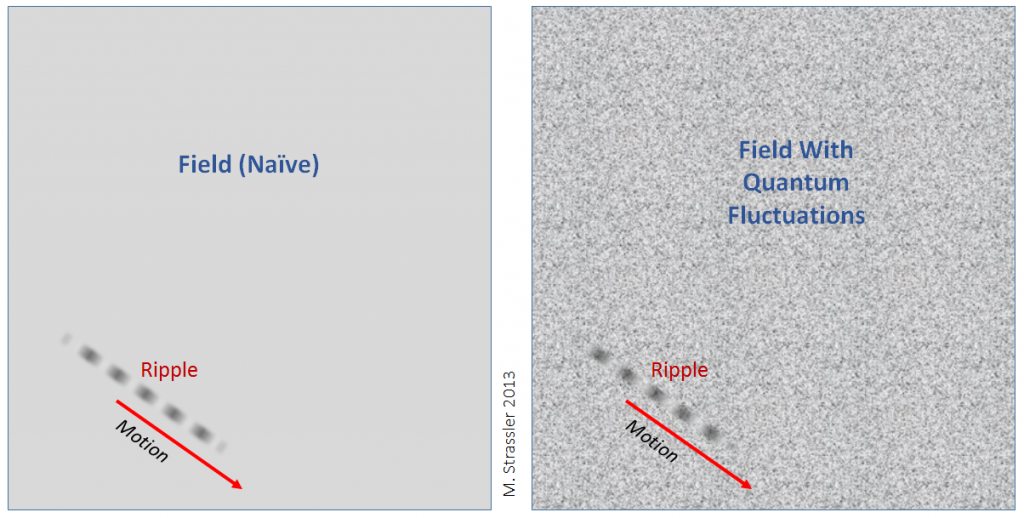 [Left] : A particle may be viewed as a little ripple in a field, which away from any particles just sits quietly — naively — like the marble in the bottom of the bowl.
[Right] : But in fact the value of the field at every point in space is constantly fluctuating, just as the particle in the bowl is always jittering.

Every elementary particle (or field) in our universe is a ripple — a small wave (this introduces another important quantum mechanics concept of wave particle duality). But here’s the thing: those fields are never entirely quiet. So here’s what’s going on :

Quantum fields never quite maintain a constant value; their value at any point in space is always jittering around a bit. This jitter is called “quantum fluctuations”, and just as for the particle in the tiny bowl, it is a consequence of the famous “uncertainty principle” of Heisenberg. (You can’t know a field’s value, and how it’s changing, at exactly the same time; your knowledge of at least one, and typically both, must inevitably be imperfect.) Again, these quantum fluctuations are sometimes described as being due to two or more “virtual particles”, but this name really reflects a technical issue, more than it guides you as to how you should really think about them.

So it is these jitters that make a particle look like it appears and disappears in and out of space, and this if we are to believe current big-bang theory, led to the spontaneous appearance of something the size of the universe.


When, in December 1973, Tryon published his article “Is the Universe a Vacuum Fluctuation?” the idea of our universe coming from a quantum fluctuation or quantum process was not taken seriously, that is until inflationary theory came and was able to explain how our universe could inflate from a tiny particle.