Home » Trivia » How Do Birds Know Where to Peck for Worms?

How Do Birds Know Where to Peck for Worms? 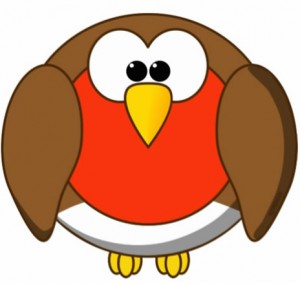 When the red, red robin comes bob-bob-bobbin’ along, it’s not bobbing out of joie de vivre. The robin probably has one thing on its mind – food !

It’s true that different birds use different techniques to locate food. For example, sandpipers have long bills with sensitive tips—they might be able to feel worms that they can’t even see. Kiwis’ nostrils are located at the tip of their bills, so they can often smell their future prey in a way that other birds cannot. However what we really want to know is how the regular common-or-garden birds like the Robin can locate their worm food.

Robins exhibit striking routines when hunting worms in our backyards. Characteristically, a robin will cock its head at a funny angle just before pecking, elongating its body with its head as far off the ground as possible, and then violently plunging the bill into the soil. Earthworms are thought to comprise about 20% of an adult robin’s diet. Robins sometimes come up dry when pecking, but their “batting average” is remarkably high, and ornithologists have logged success rates as high as twenty earthworms captured per hour.

When you ponder the possibilities, it’s conceivable that a bird could use any of the five senses to figure out where to peck:

The good news is that biologists haven’t ignored this Imponderable. The bad news is that, surprisingly they can’t agree on what the results mean. So here goes let’s dive in an consider the results of their experiments …

Our first hero is Frank Heppner, Ph.D., who performed the earliest controlled experiments in the mid-1960s. His biggest challenge in designing the study was trying to figure out how to isolate the different senses of his captured robins. Heppner made no assumptions about which of the five senses robins used to snare worms. Here’s how he approached all five of the possibilities.

Heppner concluded in his 1965 report that robins see their worm prey before pecking. In the experiments he conducted, robins found and ate worms whether or not the worms were dead or alive, and regardless of what the worms smelled like. Heppner’s research stood as the definitive experiment on robins’ worm feeding, and if you look at the popular literature on robins, you’ll find that most of the literature assumes the validity of Heppner’s conclusions.

But if Heppner was the early bird on this research, a pair of young biologists, Dr. Robert Montgomerie from Queen’s University in Ontario, Canada, and Dr. Patrick Weatherhead from Carleton University in Minnesota, still thought they could capture the worm. They weren’t convinced that robins found worms only through visual means, and in the mid-1990s, they decided to test the thesis. In their article, “How Robins Find Worms,” published in the British scientific journal Animal Behavior, the biologists revealed their doubts about Heppner’s conclusions:

In an experimental study of robin foraging behaviour, Heppner (1965) concluded that American robins locate earthworms exclusively by visual clues. He based this conclusion on a series of experiments in which robins were able to find earthworms placed in holes in a lawn (but still visible) even in the presence of loud white noise (which would have obscured any auditory clues).

Our own field observations of robins suggested to us that they might also use other sensory modes while searching for earthworms. When they cock their head, they appear to be listening, and we have watched robins successfully foraging on lawns where the grass was long enough to make earthworms difficult to see. We also watched a captive robin catch earth-worms buried in soil where we could detect no visual clues that would reveal an earthworm’s location. Thus it seemed to us that auditory, olfactory, or vibrotactile cues might be used in addition to visual cues when locating prey.

Unlike Heppner, Montgomerie and Weatherhead didn’t bother to test taste as a major cue for robins, presumably because they discounted any chance of its importance. The duo captured some robins and placed them in an outdoor aviary in Ontario. They used “feeding trays” filled with soil, into which worms were placed in random but known locations. Usually, the trays were set on the ground so that the robins could “jump” on to the soil of the tray and hunt for worms. At other times, usually to test the robins’ vibrotactile abilities, the trays were placed at a slight angle above the ground, so that the robins could peck into the soil without standing on the dirt.

The only other big change from Heppner’s methodology is that for most of the experiments, Montgomerie and Weatherhead used meal- worms (which are smaller than the earthworms that robins usually eat in “real life”) as the bait. Needless to say, robins ate mealworms with gusto, too, and when offered earthworms instead by the biologists, robins didn’t act differently from the way they did when pecking at mealworms.

Montgomerie and Weatherhead concluded that all of the experiments indicated that robins could find worms when auditory cues are available and some or all of the other cues are removed. But by no means did they prove that hearing is the only sense that robins rely upon to catch worms.

At the end of their report, Montgomerie and Weatherhead attempt to reconcile their conclusions with Heppner’s. They believed that Heppner demonstrated that robins could capture worms when they could see them, even when auditory and olfactory cues were missing, but “he didn’t test whether the robins could use other senses in the absence of visual cues.” They theorize that robins probably use a combination of cues, with visual and auditory cues probably playing the prominent role. Even if hearing is ultimately more important, they believe, robins will use all the visual cues they can amass.


As an aside it’s worth noting that the problem with this question is that you can’t really do the crucial experiment. If you surgically deafened robins, and they still found the worm, there’s your answer (earplugs wouldn’t do it, because there could still be bone transmission of sound). But even though robins aren’t particularly lovable birds, we don’t want to irreversibly deafen a bunch of robins just to satisfy our curiosity