Home » General Interest » How Do Cats Survive Falls That Would Kill Humans ?

How Do Cats Survive Falls That Would Kill Humans ?

Published on Sep 9, 2014 in General Interest 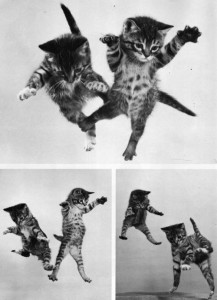 “How do Cats Survive Falls that would kill Humans? … ok so this topic may not be on the top of your list of “how does the world work” set of questions, but you must admit now we’ve asked the question you’re intrigued.


There are many stories of cats surviving falls from great heights with only relatively minor injuries. Veterinary scientists refer to it as “High Rise Syndrome” and have written learned papers on the subject, describing incidents in which cats have fallen from thirty-two storeys up and got away with nothing worse than some chest injuries and a chipped tooth. These studies seem to prove that the vast majority of cats do survive such falls but there is an obvious selection bias at work: to wit, vets tend not to see those moggies who were killed. Still, of those cats that survive long enough to see a vet, most do indeed get to live another day. This is no-doubt why we refer to our moggie friends as having ‘nine lives’.

Part of their ability to survive lies in their well- known ability to twist in mid-air and arrange a feet-first landing. For falls below around six storeys, cats have a tendency to brace themselves for impact, resulting in broken legs. Above that level, they seem to relax and allow their legs to spread out, increasing their aerodynamic drag.

Having turned themselves into furry parachutes, they then descend at a constant speed of around 65 mph

Having turned themselves into furry parachutes, they then descend at a constant speed of around 65 mph. As such, it makes little odds whether the cats fall from six storeys or twenty-six: they will hit the ground with the same amount of bone-crunching kinetic energy and chances of survival. Humans, in contrast, cannot pull off such aerobatics, giving them a terminal velocity around twice as high – and thus an impact energy four times that of cats.

“You can drop a mouse down a thousand yard mine shaft and on arriving at the bottom it gets a slight shock and walks away. A rat would probably be killed, though it can fall safely from the eleventh storey of a building; a man is killed, a horse splashes”.


Biologist J B S Haldan’s essay, ‘On Being the Right Size’