Home » History » How to Win a World War – Buy all the Tea in the World!

How to Win a World War – Buy all the Tea in the World!

So, you’re country is engaged in a World War, its stands alone against a ruthless enemy and is fighting for its very existence. What should you do to ensure victory? How can you stiffen the nation’s resolve to fight and never surrender? This dilemma was faced by the British in 1942 during World War II and with typical British aplomb the solution they chose was … to buy all the tea in the World!

Britain was facing defeat…her colonial dominance of Asia was over…her reserves were being drained… the US had not yet mobilized fully so she was alone…And Britain was buying tea!

Britain was facing defeat by the Axis powers of Germany and Japan. Her troops had been forced to make a complete withdrawal from Europe, leaving her open to an expected and narrowly avoided invasion. The “impregnable” fortress of Singapore had fallen, essentially ending Britain’s colonial dominance of Asia. Britain was close to broke, as her reserves were being drained to keep imports flowing in as Atlantic convoys were hunted and often destroyed by U-boats. The US had not yet mobilized fully so she was alone…And Britain was buying tea! In huge amounts.

One estimate is that the largest government purchases in 1942 were, in order of weight :


The German War on Tea

The German High Command fully understood the importance of disrupting the tea chain. One of the primary targets during the blitz on London in 1941 was Mincing Lane, “The Street of Tea.”

Almost all foods and clothing items were rationed. The weekly allowance was 2 ounces of butter and cheese, 8 of sugar, 4 of bacon and 2 ounces of tea, enough to make 3 cups a day, a far less stringent ration than cheese, for instance. 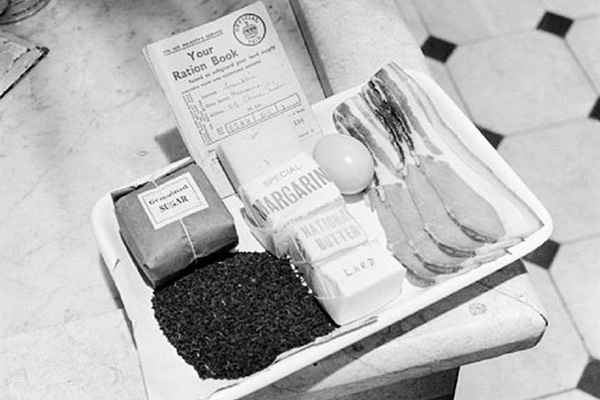 Tea us still a mainstay of the modern British Army. Since 1945 every British tank and AFV (Armored Fighting Vehicle) incorporates a BV (Boiling Vessel) inside the turret. Yes, that is indeed a Teakettle in a Tank. The latest is designated as “FV706656.” It is still standard practice for a junior member of a vehicle crew to be unofficially appointed “BV Commander” with the duty to make hot drinks for the crew. 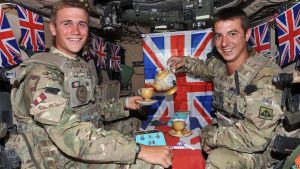 Tea was certainly one of its most visible symbols of national unity. Churchill is reputed to have called tea more important than ammunition. He ordered that all sailors on ships have unlimited tea.

Its perceived value in boosting morale not just in Britain is illustrated by the Royal Air Force dropping 75,000 tea bombs in a single night over the occupied Netherlands. Each contained one ounce bags of tea from the Dutch East Indies and was marked “The Netherlands will rise again. Chins up.” Every one of the 20 million Red Cross packages sent to prisoners of war contained a quarter pound package of Twinings.

Tea helped restore at least a semblance of calm and normality in turbulence and danger. Its essence is that it is warm and comforting. It also provided an egalitarian sharing space in a society of rigid class distinctions. In the air raids, local Air Raid Wardens and Auxiliaries, mostly women, served tea to anyone, forming huddles, bringing strangers together, and providing a centre for medical help.

1942 was a pivotal year in history. Britain survived. Tea helped.