Home » Philosophy » Is there a Place in our Brains where Consciousness exists ?

Is there a Place in our Brains where Consciousness exists ? 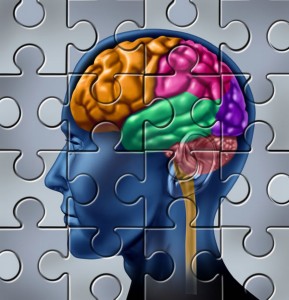 “We no longer have to wonder what self-awareness looks like – we can see it for ourselves” : A bold statement indeed. What we’re referring to here though is that scientists now believe that they can trace where they think conscientiousness physically sits in the brain – but it still doesn’t explain what it is – that is a deeper philosophical conundrum we may never solve.

Behind all this though is one of the more contentious issues in the field of “philosophy of the mind/consciousness”. Broadly there are two strains of thought on this :

Dualism – the mind is an entirely distinct entity … a ‘mental substance’, whose essential nature is thinking. Everything else is matter, or material substance, whose defining characteristic is spatial extension (i.e. filling physical space). Proposed by Descarte he envisaged two distinct realms, one of immaterial minds, with mental properties such as thinking and feeling; another with material bodies, with physical properties such as mass and shape.

Physicalism – there is only one kind of ‘stuff’ in the world, either mental OR physical, NOT two. Most physicalists insists that the mind is physical and that mental phenomena can be analysed, fully and exhaustively, in purely physical terms. Advances in neuroscience have left little doubt that mental states are intimately related to states of the brain.

So as you can see the above statement belongs more in the realm of the Physicalists than Dualists – but things are never that easy are they ?

Putting aside this debate for now let’s simply look at what scientists say they’ve discovered when investigating what changes can be seen to have taken place when consciousness is reduced or absent, as happens when people are in a vegetative state, with no sign of awareness. 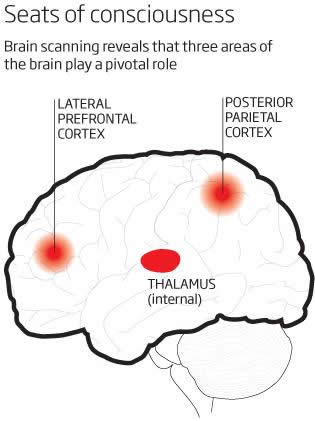 Brain scans show that such people usually have damage to the thalamus, a relay centre located smack-bang in the middle of the brain (see diagram, right).

Another common finding is damage to the connections between the thalamus and the prefrontal cortex, a region at the front of the brain, generally responsible for high-level complex thought. The prefrontal cortex has also been implicated using another technique – scanning the brain while people lose consciousness under general anaesthesia. As awareness fades, a discrete set of regions are deactivated, with the lateral prefrontal cortex the most notable absentee.

Satisfyingly, while many animals have a thalamus, the two cortical brain areas implicated in consciousness are nothing like as large and well developed in other species as they are in humans. This fits with the common intuition that, while there may be a spectrum of consciousness across the animal kingdom, there is something very special about our own form of it.

In humans the three brain areas implicated in consciousness-the thalamus, lateral prefrontal cortex and posterior parietal cortex- share a distinctive feature: they have more connections to each other and to elsewhere in the brain, than any other region. With such dense connections, these three regions are best placed to receive, combine and analyse information from the rest of the brain.

Many neuroscientists suspect that it is this drawing together of information that is a hallmark of consciousness.