There’s no mistaking the taste of Jersey Royal New Potatoes. Their unique flavour comes from Jersey’s rich fertile earth, gentle climate and the way the Jersey farmers grow them. But how did such a small place as Jersey become so renowned for a variety of potato ? 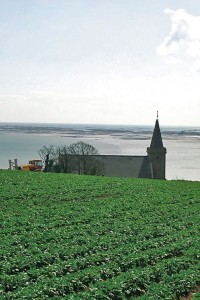 Jersey Royals growing on a côtil

In around 1880 a Jersey farmer, Hugh de la Haye, showed friends a large potato that he had bought. It had 15 ‘eyes’: points from which new plants sprout. They cut this potato into pieces, which they planted in a côtil (a côtil in Jersey is a steeply sloping field, often overlooking the sea.) above the Bellozanne valley. One plant produced kidney-shaped potatoes, with a paper-thin skin, which they called the “Jersey Royal Fluke”. This was later shortened to “Jersey Royal”. It was carefully nurtured and developed to produce the later varieties of Jersey Royals which now account for almost half of Jersey’s income from all agricultural products.

So what became of Hugh de La Haye? Grateful islanders presented Hugh with several gifts including the building of a two storey granite barn, which still bears his name on the lintel.

Over half of Jersey’s total land area is in agricultural or horticultural use. It is therefore no surprise that agriculture is one of Jersey’s largest industries.

Annually the Jersey Royal market has a value of £35m. It is Jersey’s biggest crop export, accounting for 70% of agricultural turnover. 99% of production is exported to the United Kingdom.

Mainland Britain is the only place outside Jersey where these potatoes are available to buy. They are at their most plentiful and flavoursome from April to June.

The Jersey soil is light and well drained and many farmers still use seaweed harvested from Jersey beaches as a natural fertilizer (known locally as Vraic). Jersey has some of the most formidable tidal flows in the world, and the strong movement of the sea deposits large quantities of vraic on the shore. The practice of using vraic on the land dates back to the 12th century.

The Jersey Royal season begins in November with planting under glass. The main outdoor crop is planted from January to April with harvesting usually begining in April through to the end of June. The peak of the season is May, when up to 1,500 tonnes of Royals can be exported daily. 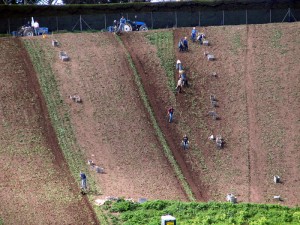 Potatoes planted on the early slopes are hand lifted, with mechanical harvesters used only for the later, flatter fields. The fields on slopes near the coast – known as côtils – are so steep that almost all the work is done by hand.

Once harvested, the level of care continues at each stage. Jersey Royals are checked twice by workers and quality controllers before being packed and loaded into refrigerated trailers for export. The potatoes are harvested, graded, packed and shipped daily to ensure that consumers are buying them when they are at their freshest and finest.

Besides being unique to Jersey, the Jersey Royal enjoys EU protection of designation of origin in much the same way that France was granted sole use of the word ‘champagne’.