What Colour are Carrots ? 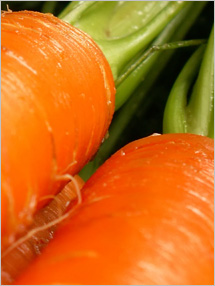 What colour are carrots ? … is this a joke? … orange of course ,even the pigment that gives it it’s orange colour is called beta-carotene, CAROTene, … see, no doubt about it, orange !

OK let’s rewind a bit and explain this shocking claim.

The Carrot has a somewhat obscure history, surrounded by doubt and enigma and it is difficult to pin down when domestication took place. But to be honest we’re not really concerned about that are we ? All we care about is this claim of Dutch perfidy to do with the colour of our carrots. So we’ll skip all the boring bits of it’s history.

It is estimated by ‘carrotologists’ (I made that up by the way) that the cultivated and edible carrot dates back about 5,000 years ago when, you guessed it, the purple root was found to be growing in the area now known as Afghanistan. Certainly temple drawings from Egypt in 2000 BC show a purple plant, which some Egyptologists believe could have been a purple carrot. Although it should also be pointed out that there are also many other colourful varieties found in Asia and there is also evidence of their use in Greece during the Hellenistic period. But none that were bright orange!

After the fall of Rome, during the Dark Ages, carrots stopped being widely seen (or at least recorded) in Europe until the Arabs reintroduced them to Europe in the Middle Ages around 1100.

So far so good. Now here’s where the Dutch enter our story…


The Dutch get Involved

The modern orange carrot was developed and stabilised by Dutch growers in the 16-17th century, certainly proven from variety names and contemporary Dutch art works. They probably derived it from mutations of the older yellow forms, and then from repeated selected breeding they eventually evolved it into the bright orange ones we have today.

A tale, possibly apocryphal, has it that the orange carrot was bred in the Netherlands to honour William of Orange. At this time the young Dutch republic was embroiled in an ’80 years war’ to rid themselves from Spanish rule and the breeding of the orange carrot was in fact a way of thanking and honouring King William I who led it during the penultimate years of the rebellion.

There is still much debate in the “carrot community” about whether the above story is true. Certainly orange carrots were derived and bred by selection in the Netherlands, that much is true, but some ‘carrotologists’ insist that the Dutch developing it to honour William of Orange is nonsense. However we at guernseyDonkey.com don’t subscribe to these doubts, why? … because Dutch Royalist involvement makes it all a much more interesting story!


If you’re really desperate to find out more then, strange but true, there is a ‘virtual carrot museum’ online : carrotmuseum.co.uk.