Home » Technology » Keeping it together – The Screw Thread

Keeping it together – The Screw Thread

… a simple device that cranked technology to new levels

Without the humble screw thread our world would literally fall apart. Screws are so common place that we don’t give a them a second thought. From mobile phones to furniture and sky scrapers they’ve more strength and holding power than nails. Additionally, if something needs to be disassembled, screws can easily be removed. We look in this article at the origins of this ubiquitous piece of technology

So where are they all used…

The humble screw thread may simply be an inclined plane wrapped around a cylinder, but without it, metaphorically and literally the wheels would come off the modern world. Nature barely uses the concept, but for mankind it holds false teeth in place, focuses microscopes, and fastens hatches on to spacecraft. Screw threads also provide the precision movement that allows the automated manufacture of just about every piece of technology we take for granted. Without the screw thread our world would be a very different place.

More screw threads are produced each year than any other machine component. That’s because they are so integral to almost every bit of technology in the world around us. Even if an object doesn’t contain a screw thread, the machine that made it will have had one.

The screw thread is so-called because the ridge spiralling down the body of the screw is known as the ‘thread’. The distance between the sections of the ridge that run parallel to one another – the ‘pitch’ – determines the screw’s holding power. So the smaller the pitch, the more friction is created to hold an object in place and prevent it slipping.

The screw thread is like driving a wedge under something, but then by wrapping the wedge round into a circle you can just keep on driving it with a simple turning action. 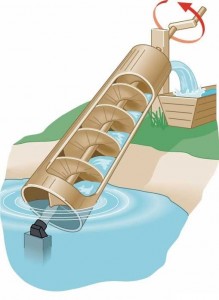 A clever invention, indeed, though tracing its origin isn’t easy. It may have been invented around 400 BC by Archytas of Tarentum, in Magna Graecia, an area of southern Italy which was then under Greek control. Certainly, the idea behind the screw was used in oil and juice presses in ancient Pompeii and also in Archimedes’ screw, a type of water pump said to have been invented by the eminent Greek mathematician Archimedes in the 3rd century BC. In fact, this device – essentially a helical screw inside a hollow tube – had been used earlier by the ancient Egyptians for drawing water up from low-lying areas to irrigate their crops. Some scholars believe that a type of Archimedes’ screw had been used even earlier by the 6th century BC Babylonian King Nebuchadnezzar II to water the Hanging Gardens of Babylon, one of the original Seven Wonders of the World.

Through the centuries, the metal screw was used in all sorts of technologies. However, there was a problem with screw components that needed to fit together, such as nuts and bolts: only a pair with an identical thread could be guaranteed to fit. At the turn of the 19th century, a young blacksmith had an idea. Previously, in order to make a screw, a cutting tool was held against the iron as a device known as a ‘treadle’ rotated, but the process wasn’t precise. In 1800, Henry Maudslay invented the screw-cutting lathe, which had a toolholder into which the cutting tool could be clamped, allowing engineers to cut identical screws.

Well over a 1,000 years after its invention the screw thread is still the best overall fixing method we’ve got.

One of Maudslay’s trainees was a talented mechanic called Joseph Whitworth. Under Maudslay’s tutelage, Whitworth developed numerous precision machine tools, which meant that individual engineers didn’t need to make their own tools, as they could now be mass-produced. Whitworth also developed a number of standard sizes for gauges and components, which were adopted nationwide by railway companies and the like. His legacy is remembered in standard screw sizes such as British Standard Whitworth. Whitworth’s influence on the world of engineering was therefore pretty huge.

As technology has developed, the screw remains the best way to temporarily attach objects together. Welding joins objects permanently, whereas screws are adjustable. Adhesive manufacturers may claim to have made nails redundant, but ‘No-more- nuts-and-bolts’ is a product that is unlikely to happen. Well over a 1,000 years after its invention the screw thread is still the best overall fixing method we’ve got.