Manet – The Painter who gave Birth to Impressionism

A Parisian newspaper once described him :


“Yellow gloves, a crisp cravat, superb shoes, light-coloured trousers and a flower in his buttonhole, he can be found striding along the Boulevard des Italiens with the hurried step of a man who is meeting a pretty woman; or one sees him at ease, smoking a good cigar, on the terrace of the Cafe Riche or the Cafe Tortoni.”

Actor? Politician? Confidence man? None of these but one of Europe’s greatest painters, Edouard Manet.

Born in Paris on 23rd January 1832 into a wealthy, Manet was expected to follow his father into law, but he was determined to become an artist. 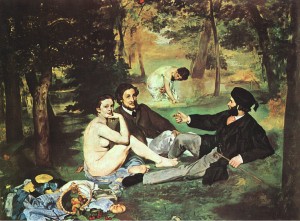 His first real fame came in 1863 when Napoleon III established the famous ‘Salon of the Rejected’ for paintings turned down by the prestigious but hidebound ‘official’ salon at the Louvre. It was there that Manet first displayed Le Dejeuner sur L’Herbe, a painting that both shocked and titillated the public by showing a nude woman casually enjoying a picnic in the woods with two unconcerned but fully dressed men.

Manet rejected the idea of painting classical allusions, claiming to paint only the commonplace, showing life as it was lived. ‘There is only one true thing’, he said, ‘to paint spontaneously what one sees’ – a comment that might have made some people wonder where he saw Le Dejeuner sur L’Herbe.

Although not truly an Impressionist himself, Manet is widely considered the father of Impressionism and one of the most influential painters of his century

Although not truly an Impressionist himself, Manet is widely considered the father of Impressionism and one of the most influential painters of his century. By the time he was in his late forties, Manet was suffering from the symptoms of syphilis. In constant pain and partially paralysed, he was forced to have his gangrened left foot amputated, but, further weakened by the operation, he died eleven days later on 30 April 1883 at the age of 51. 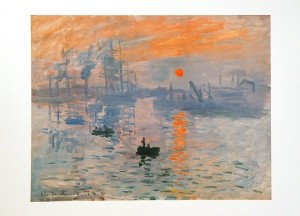 Impressionism was a 19th-century art movement that originated with a group of Paris-based artists. Their independent exhibitions brought them to prominence during the 1870s and 1880s, in spite of harsh opposition from the conventional art community in France. The name of the style derives from the title of a Claude Monet work, Impression, soleil levant (Impression, Sunrise), which provoked the critic Louis Leroy to coin the term in a satirical review published in the Parisian newspaper Le Charivari.

Impressionist painting characteristics include relatively small, thin, yet visible brush strokes, open composition, emphasis on accurate depiction of light in its changing qualities (often accentuating the effects of the passage of time), ordinary subject matter, inclusion of movement as a crucial element of human perception and experience, and unusual visual angles.