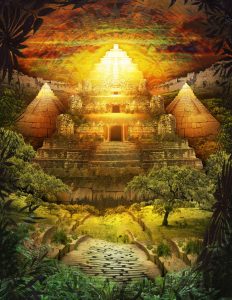 In this particular article we look at El Dorado.

EL DORADO STARTED AS A MAN and ended up as a mythical golden city. Along the way, countless hunters seeking its treasures suffered disease, snakebite, and death by starvation, exhaustion, or murder. Some even ate their own boots boiled in herbs. – None found the gilded land.

The legend began with the Muisca people in the mountains of what is now Colombia, who told the first Spanish explorers that at one time, a remarkable ceremony had taken place at Lake Guatavita, near what is now Bogota. Every time a new chieftain rose to power, they said, he coated himself head to toe with gold dust and dove into the lake, while his attendants threw gold and emeralds into the water. The chief was known as El Dorado, the Golden One.

This ceremony had ended well before the first Europeans arrived, but the story’s allure was irresistible.

Accordingly a series of Spanish expeditions were launched into the wilds in search of gold. They found Lake Guatavita fairly quickly and partially drained it, dredging up some jewelry but not the riches they had imagined.

Most notorious of the seekers after El Dorado was a genuine psychopath, Lope de Aguirre, who called himself “the wrath of God.” Foul tempered and implacable, Aguirre killed his enemies, his friends, priests, ordinary citizens, and eventually his own daughter in his quest not only to find El Dorado but also to establish his own independent rule in South America. Eventually the Spanish had him killed and his body cut into pieces.

The English Join the Search

Perhaps the most famous of all the ill-fated searchers was English explorer Sir Waiter Raleigh.

Already in the latter portion of his life, he was out of favour with Queen Elizabeth for secretly marrying and fathering a child with one of her attendants. Raleigh determined to make his fortune and regain favour with the crown by bringing back the riches of “the great and golden city of Manoa, which the Spaniards call El Dorado.”

A first expedition was unsuccessful, unpleasant (a crocodile devoured one of his crew), and bankrupting.


“There was never any prison in England, that coulde be founde more unsavoury and lothsome, especially to my selfe.”

Nevertheless, in 1617 he made a second attempt, accompanied by his son Watt. Also a failure, the journey led to Watt’s death in a fight with Spaniards. Upon his return to England, Raleigh was executed.

So, the city of gold has remained merely a fading figment and a symbol of the wages of greed.