Home » Technology » Nails – How Long Have They Been Around ?

Nails – How Long Have They Been Around ? 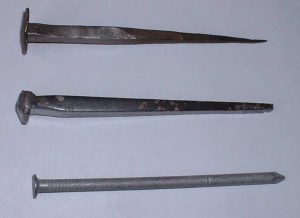 Someone – no one knows who for certain – invented an entirely new way of building wooden houses in 1833. Traditionally, heavy wooden beams, one foot thick, were fitted together to form the solid framework for a house. Corners were made by sharpening the end of one beam and fitting it into an accurately cut hole in the next beam. For extra strength a wooden peg could be driven through both. All this took many days’ work by skilled carpenters. But in 1833, in Chicago, there weren’t enough carpenters to go around and too many people wanted somewhere to live in a hurry. Chicago grew from being a frontier trading-post to the fourth largest city in the world, all in a hundred years.

The new type of house which appeared in Chicago had a skeleton made of thin sawn lengths of wood, nailed together. The basic idea is so simple, and so much used today all over the world, that it is hard to realize it ever had to be invented. It was like a big, light basket: all the different pieces of wood took the strain together. Critics said the first strong wind would blow it down and called it the ‘balloon-frame house’. But three-quarters of all houses in the United States are built this way today. It took about a week to put the balloon-frame house up, and just about anyone who could use a hammer and nails could do the job.

up until the 19th century nails were made by hand

Men have been using nails for the last five and a half thousand years. But right up until the nineteenth century, nails were made by hand. It was a slow job, and nails were things to be treated with respect. The balloon-frame house would have been impossible without the invention, at the beginning of the nineteenth century in America, of machinery to mass-produce nails cheaply. The first machines stamped out nails from flat sheets of metal. In later years they were cut and shaped from wire. Nails could now be dropped, wasted, bent, banged into wood with gay abandon – all the things we are used to doing – because there was an unending supply.


In medieval times a nail-maker forged iron into rough bars, then hammered pieces through a graded series of holes till he had made the right shape, and finally flattened a lump at one end to make the head. Nails of copper, brass or iron were used for putting floorboards together, roofs on buildings, locks on chests, leather coverings on chairs, hinges on doors, copper bottoms on ships, shoes on horses.

Replica of the hand made nails made for the Mary Rose

In 1606 an Englishman, Sir Bevis Bulmer, patented probably the first machine to help with nail-making. It was not very successful, but it did cut the iron into rods of various thicknesses.

American machines were introduced into England in the nineteenth century. But in 1830 in England there were at least 60,000 men, women and children who earned their living from hand-making nails. They worked at home. At the beginning of the week the nail master handed out nail iron which was already slit into rods of various sizes. At the end of the week the workers turned in a pile of hand-forged nails. It was hard, poorly paid work. Slowly the machinery took over and began to produce nails by the ton, not the pound. But there were still some hand nail-makers working in England at the beginning of the 20th Century producing nails little different in appearance from those the Romans made 2,000 years ago.

‘Of all the results of human ingenuity, there is nothing more simple, more generally useful, or more efficient in its universal application, than a nail.