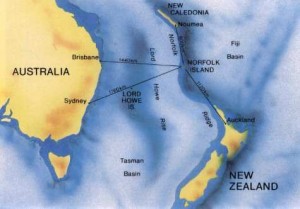 
Discovery and the First Settlement

Discovered by Captain Cook during his second voyage in 1774, Norfolk Island was initially used as a penal colony.

The majority of the convicts were slowly and eventually evacuated to Van Diemen’s Land (Tasmania) and by 1814 the penal settlement has closed and Norfolk Island lay abandoned and tranquil for the next eleven years.

In 1825, after eleven years drowsing in the sun, Norfolk Island was elected by His Majesty’s Government to be the site of another colony.

The original settlement was established primarily in order to develop the resources of the island. This one had no such purpose. It was designed to be conducted along the lines of `a great Hulk or Penitentiary’ for the incarceration of `re-convicted incorrigibles’. It was designated to become `a place of the severest punishment short of death’. Sir Thomas Brisbane wrote: “I could wish it to be understood that the felon who is sent there is forever excluded from hope of return”.

Such depravities are destined to culminate in rebellion and many occurred. Following one uprising, a priest, later to be-come Bishop Ullathorne, wrote:

‘I have to record the most heart-rending scene that I ever witnessed. The turnkey unlocked the cell door and … then came forth a yellow exhalation, the produce of the bodies of the men confined therein. I announced to them who were reprieved from death and which of them were to die. It is a literal fact that each man who heard his reprieve wept bitterly, and each man who heard his condemnation of death went down on his knees and, with dry eyes, thanked God they were to be delivered from this horrid place.

The morning came, they received on their knees the sentence as the will of God. Loosened from their chains, they fell down in the dust, and, in the warmth of their gratitude, kissed the very feet that had brought them peace.’

The years 1840-43 saw the population surpass 2,000 but the enlightened and brave attempt at prison reform by Alexander Maconochie, private secretary to the Lieutenant-Governor Sir John Franklin in Hobart in Van Diemen’s Land (now Tasmania), was defeated by distant authorities and present clerics who could not conceive of any system but unremitting punishment.

As a result, conditions became ever more hellish.

Eventually the voices of men like Bishop Ullathorne and Bishop Willson were heard. In 1854, the colony was totally abandoned and its convicts transported to Port Arthur in Van Diemen’s Land, some of them finishing their days in the town named New Norfolk.

Across the Pacific 3,700 miles away another crisis was brewing that would impact Norfolk Island history forever. Pitcairn island had been settled by the crew of the HMS Bounty, who in 1789 mutinied against her Captain, Captain Bligh in one of the most infamous stories of the Royal Navies history. 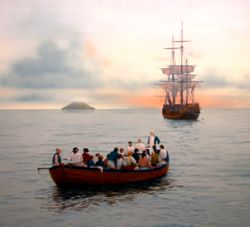 By 1854, the Pitcairners were finding their tiny island increasingly unable to support them. Of its one and three quarter square miles, only 8% (88 acres) is flat land and there were now close to 200 mouths to feed. Compounding the problem was the scarcity of fish; they had deserted the coastal waters following a storm in 1845 which caused massive landslides. In 1855, the elders wrote to Queen Victoria, humbly begging for help. In one of the most generous gestures in the Empire’s history, she offered them Norfolk Island.

On the 3rd of May 1856, the entire Pitcairn community of 194 persons sailed for Norfolk in the Morayshire . After a miserable trip of 3,700 miles, during which virtually the entire ship’s complement was hideously sea-sick for the ent-ire 5 weeks, the Morayshire arrived at Norfolk Island on the 8th of June, 1856. A re-enactment of this landing is still celebrated annually to this day. Perhaps because the date is also that of the day that the Bounty was commissioned, it is commonly known as Bounty Day.

The names of the Bounty mutineers, Adams, Buffett, Christian, Evans, McCoy, Nobbs and Quintal, still form the nucleus of the Norfolk Island community today. The islanders all speak English in addition to their own tongue which is a mixture of West County England dialect and Tahitian… Norfolks.