If you’re easily offended then this article might not be for you. However it does prove that British Chemists do have a sense of humour … well a puerile one at least.

Bare with me here as we do a bit of an in-depth explanation of some of the naming conventions chemists have come up with. 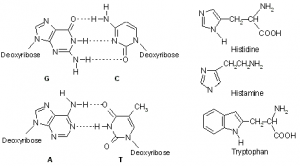 Example of some Heterocyclic componds

Heterocyclic compounds are molecules made up of atoms arranged in a ring, usually of carbon and hydrogen, along with another atom of a different element. There are many different heterocyclic compounds, with different numbers of atoms making up the ring structure and a variety of elements supplying the other atom. They all have unique chemical formulae, such as C5H5N or C4H8O2, but it’s often more convenient to refer to molecules by name. As you can imagin there are many existing variations of this particular type of molecule as well as the possibility of synthesizing new ones, and in the 1880s two chemists, named Arthur Hantzsch and Oskar Widman, independently came up with a system for determining a unique name for each compound based on the number of atoms in the ring and the nature of the other element that is present.

OK, here we go, as you might assume this naming convention is going somewhere other than just the rather rareified area of Chemical nomenclature. And it’s Arsenic that will get us there.

The Hantszch-Widman nomenclature, as it was called, failed to take account of the puerile sense of humour of British chemists. For almost every heterocyclic compound, the system produced a perfectly unexceptionable name that was memorable without being indecent. But a problem arises when the element supplying the extra atom is arsenic.

The word Arsenic is derived from an Arabic word, al-zarnikh, and Professors Hantszch and Widman decided that all heterocyclic compounds using arsenic should begin with ‘ars’. (Other elements gave rise to prefixes like ‘fluor’ for fluorine and ‘iod’ for iodine and so on.) So far so good. But they then decided that, depending on the ring size, there should be a series of suffixes, such as ‘irine’, ‘ete’, ‘ole’, ‘inine’ and ‘epine’. So unfortunately there was no way to avoid a compound based on an atom of arsenic plus a size-5 ring being called ‘arsole’. This is a genuine molecule.

What causes even more schoolboy sniggering is that you can read more about it in a Paper by two Swedish scientists which begins: “The aromaticity of arsoles has been debated in the literature for years.. .”

Just to round things off if you were to the synthesise arsole and a 6-benzene ring you would get a compound called ‘sexibenzarsole’.