Remember Remember the 5th of November

Remember, remember,
the fifth of November,
Gunpowder, treason and plot.
We see no reason
Why Gunpowder treason
Should ever be forgot!

…so goes the words to the the Guy Fawkes rhymeRemember, remember the fifth of November Gunpowder, treason and plot. We see no reason, why gunpowder treason Should ever be forgot.
Guy Fawkes, guy, t'was his intent
To blow up king and parliament.
Three score barrels were laid below
To prove old England's overthrow.

And what shall we do with him?
Burn him!


In 1605, thirteen young men planned to blow up the Houses of Parliament. Among them was Guy Fawkes, Britain’s most notorious traitor.


After Queen Elizabeth I died in 1603, English Catholics who had been persecuted under her rule had hoped that her successor, James I, would be more tolerant of their religion. James I had, after all, had a Catholic mother. Unfortunately, James did not turn out to be more tolerant than Elizabeth and a number of young men, 13 to be exact, decided that violent action was the answer.

A small group took shape, under the leadership of Robert Catesby. Catesby felt that violent action was warranted. Indeed, the thing to do was to blow up the Houses of Parliament. In doing so, they would kill the King, maybe even the Prince of Wales, and the Members of Parliament who were making life difficult for the Catholics. Today these conspirators would be known as extremists, or terrorists.

To carry out their plan, the conspirators got hold of 36 barrels of gunpowder – and stored them in a cellar, just under the House of Lords.

But as the group worked on the plot, it became clear that innocent people would be hurt or killed in the attack, including some people who even fought for more rights for Catholics. Some of the plotters started having second thoughts. One of the group members even sent an anonymous letter warning his friend, Lord Monteagle, to stay away from the Parliament on November 5th. Was the letter real?

The warning letter reached the King, and the King’s forces made plans to stop the conspirators.

Guy Fawkes, who was in the cellar of the parliament with the 36 barrels of gunpowder when the authorities stormed it in the early hours of November 5th, was caught, tortured and executed.

It’s unclear if the conspirators would ever have been able to pull off their plan to blow up the Parliament even if they had not been betrayed. Some have suggested that the gunpowder itself was so old as to be useless. Since Guy Fawkes and the other conspirators got caught before trying to ignite the powder, we’ll never know for certain.

Even for the period which was notoriously unstable, the Gunpowder Plot struck a very profound chord for the people of England. In fact, even today, the reigning monarch only enters the Parliament once a year, on what is called “the State Opening of Parliament”. Prior to the Opening, and according to custom, the Yeomen of the Guard search the cellars of the Palace of Westminster. Nowadays, the Queen and Parliament still observe this tradition.

On the very night that the Gunpowder Plot was foiled, on November 5th, 1605, bonfires were set alight to celebrate the safety of the King. Since then, November 5th has become known as Bonfire Night. The event is commemorated every year with fireworks and burning effigies of Guy Fawkes on a bonfire. 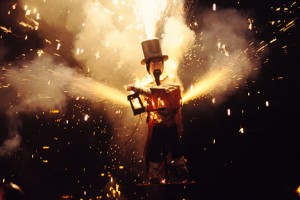 The tradition of Guy Fawkes-related bonfires actually began the very same year as the failed coup. The Plot was foiled in the night between the 4th and 5th of November 1605. Already on the 5th, agitated Londoners who knew little more than that their King had been saved, joyfully lit bonfires in thanksgiving. As years progressed, however, the ritual became more elaborate.

Soon, people began placing effigies onto bonfires, and fireworks were added to the celebrations. Effigies of Guy Fawkes, and sometimes those of the Pope, graced the pyres. Still today, some communities throw dummies of both Guy Fawkes and the Pope on the bonfire (and even those of a contemporary politician or two), although the gesture is seen by most as a quirky tradition, rather than an expression of hostility towards the Pope.

Preparations for Bonfire Night celebrations include making a dummy of Guy Fawkes, which is called “the Guy”. Some children even keep up an old tradition of walking in the streets, carrying “the Guy” they have just made, and beg passersby for “a penny for the Guy.” The kids use the money to buy fireworks for the evening festivities.

On the night itself, Guy is placed on top of the bonfire, which is then set alight; and fireworks displays fill the sky.

The extent of the celebrations and the size of the bonfire varies from one community to the next. Lewes, in the South East of England, is famous for its Bonfire Night festivities and consistently attracts thousands of people each year to participate.

Bonfire Night is not only celebrated in Britain. The tradition crossed the oceans and established itself in the British colonies during the centuries. It was actively celebrated in New England as “Pope Day” as late as the 18th century. Today, November 5th bonfires still light up in far out places like New Zealand and Newfoundland in Canada.

Remember, remember, the fifth of November,
Gunpowder, treason and plot!
A stick or a stake for King James’ sake
Will you please to give us a faggot
If you can’t give us one, we’ll take two;
The better for us and the worse for you!