There are many killjoys out there who will insist that the modern-day, red-suited image of Santa Claus was cynically invented by money-driven, cheap-suited executives at The Coca-Cola Company. While the illustrations Haddon Sundblom created for Coke in the 1930s certainly helped to cement this vision of Santa as the “traditional” Christmas image, Santa had existed in that form for many years. Refer to an article I’ve written previously on Who is Father Christmas?.

Rudolph the Red-Nosed Reindeer was invented for a department store.

But killjoys, take heart! Unlike Santa, his helper Rudolph really is the methodically manufactured result of a department store seeking a new marketing opportunity.

A song featuring Rudolph was created in 1939 by copywriter Robert L. May, an employee of the Chicago-based Montgomery Ward retail chain. Montgomery Ward was started in 1872 as a mail-order business, then expanded into hundreds of stores during the 20th century, before going spectacularly bankrupt at the end of 2000. 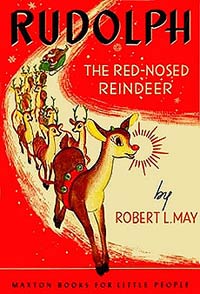 Montgomery Ward had been giving away promotional books for a number of years, before deciding that May should create their own publication in-house, as a way to save money, They distributed over 2 million copies of the first edition of the booklet; and given the long-term popularity of Rudolph, you’d think that by retaining the copyright in the story (since May was working as an employee of the company when he wrote it) Montgomery Ward would have made millions of dollars out of shiny-nosed reindeer. However, in 1947 they generously transferred the copyright to May, who promptly began commercially exploiting most notably by asking his songwriter brother-in-law, Johnny Marks, to adapt the lyrics into a Christmas standard, which later became a hit for the likes of Gene Autry and Bing Crosby.

The first eight of Santa’s reindeer – Dasher, Dancer, Prancer, Vixen, Comet, Cupid, Donner and Blitzen originally appeared in the 1823 poem ‘A Visit from St Nicholas , known today as ‘The Night Before Christmas’