Despite first appearances, the English we speak now is a direct descendant of Anglo-Saxon. So have you ever wondered what Anglo-Saxon might have sounded like ? In this article we look at one particular epic Anglo-Saxon poem, ‘The Battle of Maldon’ to see how Anglo-Saxon was written and how it would have sounded.

When the Saxon invaders came to Britain in the 5th and 6th centuries they brought with them their own language. Although they did not kill all the native Britons they did almost destroy their language and replacing the native ‘Celtic’ language with their own ‘Germanic’ tongue. With the new language, of course, came new place names, many of which survive to the present day. The existing settlements were not destroyed, but the Saxons found the names difficult to pronounce, so they renamed them in their own language.

The Anglo-Saxon poem of ”The Battle of Maldon” is an excellent example of written and spoken Early English. It’s split into 3 sections below with the Anglo-Saxon text, a modern English translation and a narration of the poem so we can again here the ancient tongue of early English. It’s fun to see how much we can recognize from a direct descendant of our modern language that’s over 1,000 years old.


The Battle of Malden

The Battle of Maldon is a poem describing a historical skirmish between East Saxons and Viking (mainly Norwegian) raiders in 991. The poem is remarkable for its vivid, dramatic combat scenes and for its expression of the Germanic ethos of loyalty to a leader. The poem, as it survives, opens with the war parties aligned on either side of a stream (the present River Blackwater near Maldon, Essex). The Vikings offer the cynical suggestion that the English may buy their peace with golden rings. The English commander Earl Byrhtnoth replies that they will pay their tribute in spears and darts.

The poem is incomplete hence the rather odd beginning!

In preparation for battle, a warrior sets his hawk free to fly to the forest. Likewise the warriors send their horses to the rear.

Byrhtnoth, the Ealdorman, arranges the young men who have come to fight [the untrained youths of the Essex levy, it seems], teaches them how to hold sword and shield and where to stand. Then he goes to the company of his hearth companions who will be in the vanguard of the fight.

The Viking herald calls across the water, offering to accept tribute for peace and not to fight.

The English and the Vikings are not able to attack each other, save with arrows, while the water flows between them. Then, when the narrow causeway becomes passable, the English have the advantage, and no Vikings can gain the shore.

The Vikings call for Byrhtnoth to allow them to cross to have a more even fight, and then the Eorl, on account of his ofermod, allows them to come across the water.

The Vikings cross and the battle begins in earnest. For a while the English are doing well, with many individual acts of heroism but then Byrhtnoth is killed by a thrown spear. Wulfmaer the Young draws out the spear and throws it back at the Viking, killing him, but Byrhtnoth has received his fatal wound.

Byrhtnoth thanks God for all the blessings he has received on earth, but then the Vikings kill him and the men next to him. And with Byrhtnoth dead, some of the English flee the battle, most visibly the sons of Odda. Godric leaps on Byrhtnoth’s horse and rides away.

The hearth-companions do not give up, however, and continue to fight and inspire each other with speeches.

Offa speaks, saying the Godric has doubly betrayed them all, as some of the English, seeing Byrhtnoth’s horse riding away, think that the Ealdorman had given a signal for retreat. It is now obvious that the Vikings will own the day. But Leofsunu swears not to step back one foot from the battle but instead will fight to the death. Other men also refuse to leave.

Byrhtwold, the old retainer, then utters the most famous lines in Old English poetry:
The heart must be braver, courage the bolder
Mind the stronger, as our strength lessens.

He, and the rest, stay fighting by the side of their dead lord. The poem ends by mentioning another Godric who was killed fighting, not the cowardly one who had fled.

FACTOID #1 : Where did they come from? 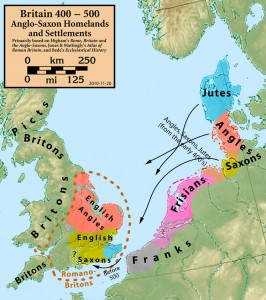 The Anglo-Saxons are in fact a combination of 3 different European peoples: the Angles; Saxons and Jutes. They originated from what is modern day Germany, Denmark and the Netherlands.

The impetus to move was land pressure in their home countries. The land was often of poor quality, often flooded and therefore proved difficult to grow crops, so they were looking for new places to farm. In addition some Britons invited them to keep out invaders from Scotland and Ireland, offering them money in return.

The native Britons were gradually displaced by the invaders. Those that didn”t like the Anglo-Saxons fled westward to live in Wales and Cornwall. The evidence of which we can still see today in the Celtic languages of Welsh & Cornish.

Old English was the West Germanic language spoken in the area now known as England between the 5th and 11th centuries. Speakers of Old English called their language Englisc, themselves Angle, Angelcynn or Angelfolc and their home Angelcynn or Englaland. Old English began to appear in writing during the early 8th century. Most texts were written in West Saxon, one of the four main dialects. The other dialects were Mercian, Northumbrian and Kentish.

Old English / Anglo-Saxon was sometimes written with a version of the Runic alphabet, brought to Britain by the Anglo-Saxons until about the 11th century.

Runic inscriptions are mostly found on jewellery, weapons, stones and other objects. Very few examples of Runic writing on manuscripts have survived.

The days of the week are named after early Anglo-Saxon Gods: