Home » Alderney » The Black Death in the Channel Islands

The Black Death in the Channel Islands 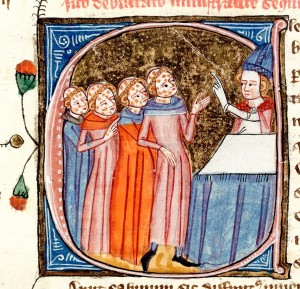 Not the most pleasant of subjects but when the great mortality as it was called struck the Channel Islands it left in its’ wake a scarred population, decimated in numbers and traumatised in the minds and bodies of all islanders.

During the 14th century two things happened almost simultaneously that were to transform the historical landscape of the Islands. The first was the beginning of the Hundred Years War (1337-1453); the second was the coming of the Black Death (1348-9). Both were apocalyptic from the islanders point of view. They found themselves on the frontline of conflict and Guernsey, Jersey and Sark were repeatedly raided and often occupied by the French for several years at a time. Whilst islanders could attempt to fight the one against the other they were powerless – as the plague ravaged the population.

In contrast to the much fuller record of the Channel Islands’ role in the Hundred Years War, the Black Death hardly figures at all. Nobody counted the islands dead in 1348-9. Instead we have to get a picture of these times from contemporary accounts elsewhere in Europe and also, with a bit of lateral investigation, by studying parish records, tax returns and land usage pre & post plague. Together they give us a picture of a society in partial meltdown.


Normandy and the Channel Islands

The plague first attacked England in the autumn of 1348, whilst Northern France was already suffering under the scourge in the summer of that year. In August 1348 it’s known that the pestilence had visited Normandy and was found at Calais, then in the possession of the English. Probably, also, at this time, Jersey and Guernsey, with which England was in constant communication, were decimated by the disease.

As an illustration of how greatly the islands suffered we can look to the records of the King’s taxes, usually raised upon the fishing industries, and find that they could not be levied. The English King, sympathetic to the plight of islanders, wrote to John Mautravers, the Guernsey Governor :

“By reason of the mortality among the people and fishing folk of these islands, which here as elsewhere has been so great, our rent for the fishing, which has been yearly paid us, cannot be now obtained without the impoverishing and excessive oppression of those fishermen still left”

In Jersey we see that 8 out of the 10 parishes, for which records survive, lost their rector in those years. And while an 80 per cent death rate is improbably high even for an outbreak of pneumonic plague (the most terrible of all plague varieties), it was not without precedent among the clergy. At Tournai, for example, in densely populated Flanders, a contemporary witness of the Black Death reported that :

“no one, rich, middling or poor, was safe (from the pestilence) … and certainly there were many deaths among the parish priests and chaplains who heard confessions and administered the sacraments, and also among the parish clerks and those who visited the sick with them.”

In an entry in the chronicle of the Cistercian abbey of Louth Park (Lincolnshire), a monk relates :

“In the year of the Lord 1349 the hand of Almighty God struck the human race a deadly blow… This stroke felled Christians, Jews and infidels alike. It killed confessor and penitent together. In many places it did not leave a fifth of the people alive.”

Coastal France was among the regions most affected. By 1380, Normandy’s population was down by a half and it would stay that way for another hundred years, before beginning its sixteenth-century recovery.

How closely the Channel Island’s plague mortalities matched those of Normandy is of course unknown. However it would be reported in Brittany in 1406 that ‘only four or five thousand men dwell (in Jersey) ‘. And while that was probably just a guess, the same figure would be repeated by the islanders themselves and could well have been close enough to the truth.

In the Channel Islands, as elsewhere, a social revolution was in progress. No longer full to bursting as in the pre-plague years, the Islands experienced a time of plenty for the poor. Landholdings stood vacant and labour was short. There were jobs for all, not least for the young women. In Jersey in St Helier we see women able to chose to either stay single or marry late.

For more than four generations, in the wake of the Black Death, late marriage, declining fertility and smaller family size were the man-made factors keeping numbers down. Factors outside of mankind’s control were unrelenting plague and a worsening climate, colder and wetter than before. The consequence overall was economic stagnation, affecting almost every community in the land.