Home » General Interest » The History of the Christmas Pud

The History of the Christmas Pud

The “Christmas Pud” – in our opinion the most delicious of all the scrumptious winter fayre that helps make up the traditional British Christmas.

However what we think of as Christmas Pudding, is not what it was originally like!

Unlike their namesake of today they were really made with minced meat, dried fruits, alcohol and spices.

(it) was eaten as a fasting meal in preparation for the Christmas festivities.

The Christmas Pud’s other ancestor was a porridge called ‘frumenty‘. Frumenty was made up of a fairly wide variety of ingredients and as such could come in a variety of formats or combination of its’ ingredients. It could be made up of cracked wheat and beef or mutton with raisins, currants, prunes, wines, spices, sugar, saffron or milk . This would often be more like soup or pottage and was eaten as a fasting meal in preparation for the Christmas festivities. 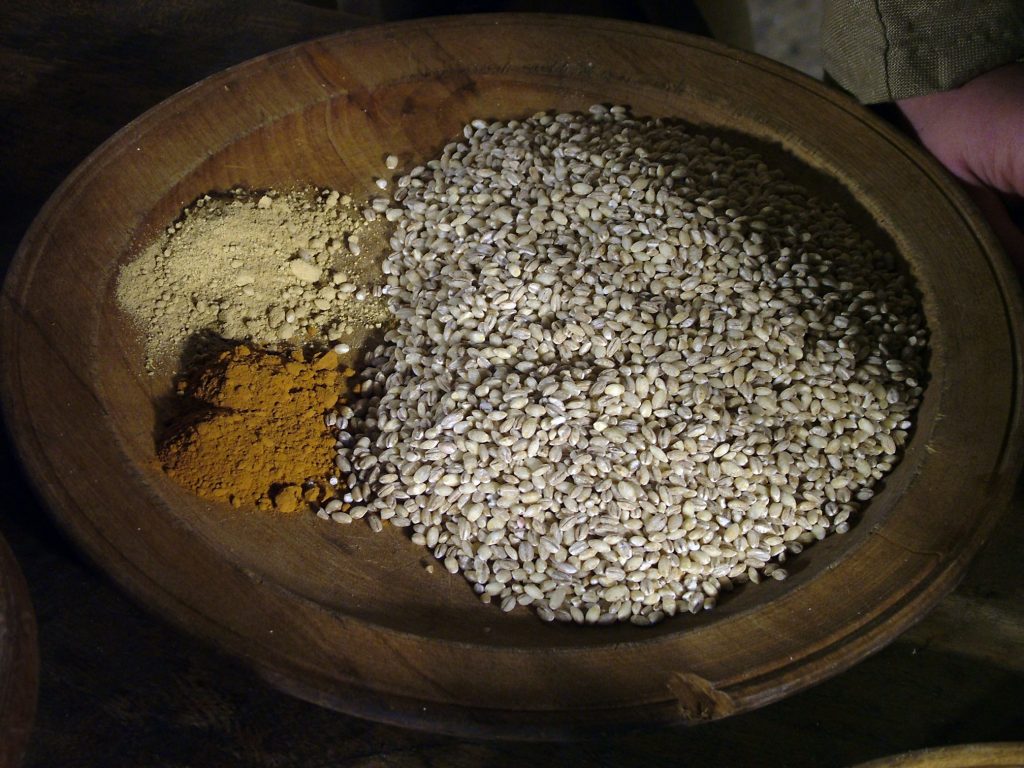 Frumenty (sometimes frumentee, furmity, fromity, or fermenty) was a popular dish in Western European medieval cuisine. It is a pottage, a thick boiled grain dish – hence its name, which derives from the Latin word frumentum, “grain”. It was usually made with cracked wheat boiled with either milk or broth. As such, it was a peasant staple. More luxurious recipes include eggs, almonds, currants, sugar, saffron and orange flower water. Frumenty was served with meat as a pottage, traditionally with venison or occasionally porpoise (considered a “fish” and therefore appropriate for Lent). It was also frequently used as a subtlety, a dish between courses at a banquet.

For both of these the meat ingredient was provided by animals that were slaughtered in the autumn as they often would not survive the harsh medieval winters. The fruits, spices and alcohol involved in these eclectic recipes helped to preserve the meat for months to come.

After the 16th century there was an increase in the abundance of dried fruit available and the development of better preservation methods for meat, the pudding made its shift from a savoury dish to a sweet one so that by 1595, mince pies and frumenty was slowly changing into a plum pudding, having been thickened with eggs, breadcrumbs, dried fruit and given more flavour with the addition of beer and spirits.

It became the customary Christmas dessert around 1650, but in 1664 the Puritans banned it as a bad custom.

In 1714, King George I re-established it as part of the Christmas meal, having tasted and enjoyed Plum Pudding. By Victorian times, Christmas Puddings had changed into something similar to the ones that are eaten today.

Although Christmas Puddings are eaten at Christmas, some customs associated with the pudding are about Easter! The decorative sprig of holly on the top of the pudding is a reminder of Jesus’ Crown of Thorns that he wore when he was killed. Brandy or another alcoholic drink is sometimes poured over the pudding and lit at the table to make a spectacular display. This is said to represent Jesus’ love and power.