The Oldest Living Organism on Earth

In 1964 a geologist was carrying out research in the White Mountains of California. He was taking core samples from a clump of ancient trees known as bristlecone pines. These trees were known to be thousands of years old, with a largely dead core but a living bark. The geologist was looking for data from which to infer the size of glaciers that had existed at earlier epochs.

they had just killed a 4,950 years old tree, the then known oldest living organism on Earth

Unfortunately, his coring device snapped, so the geologist duly asked permission of the US Forest Service to cut down the tree to get the necessary data from tree ring patterns. They agreed, and by doing so they killed what was at the time the oldest living organism on Earth ! The tree turned out to be a staggering 4,950 years old. It was as if a doctor taking a biopsy to determine the state of a patient’s health had sought permission to kill the patient instead in order to do a post-mortem, because his biopsy needle had broken!

The felled tree had a younger neighbour, discovered in the 1950s and still alive today, estimated to be 4,796 years old and so is currently coming up for a 4,800th birthday. These trees live a long time because they have a slow metabolism, with the living layer of bark growing only an inch or so every hundred years. The pine’s needles last for thirty or forty years, and even cones from the oldest trees can produce seeds that will grow today.

Until 2008, the bristlecone pine was believed to be the oldest living organism in the world. Then a tree scientist announced the discovery of a clump of spruce trees in the mountains of Sweden, one of which was 9,550 years old. At a stroke, the age of the Earth’s oldest living inhabitant had doubled. 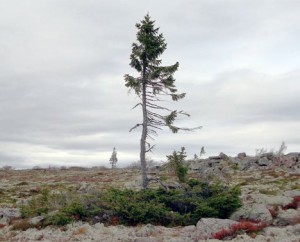 The oldest living organism, at over 9,500 years old, the Swedish Spruce ‘Gran Picea’

This spruce tree began to grow at a time when agriculture was in its infancy, the earliest cities were beginning to form, and the wheel was invented, thousands of years before the rise of the principal ancient civilizations of the East and the Mediterranean.

The uniqueness of the Swedish spruce trees was revealed by DNA analysis. Unlike the usual trees we are familiar with, these trees had many trunks. A single trunk might last for six hundred years, but as soon as the old one died a new trunk appeared near by, with identical DNA and therefore part of the same organism.

And the scientist who made this discovery had a very appropriate name … Leif – Professor Leif Kullman.