‘The Queen, Our Duke’ – an odd thing to say, especially in a loyal toast to the English Sovereign

“The Queen, Our Duke” – an odd thing to say, especially in a loyal toast to the English Sovereign. Nonetheless whenever Channel Islanders raise their glasses to her majesty that’s the toast that will be made.

The origins of this toast lies in the Norman heritage of the Channel Islands. The Duke of Normandy is the title of the reigning monarch of the British Crown Dependencies of both Guernsey and Jersey. The title traces its roots back to the Duchy of Normandy (of which the Channel Islands are remnants). Whether the reigning sovereign is male or female, the title remains “Duke of Normandy”. Strictly speaking the toast should be “La reine, notre duc” which is the Norman French, and local patois, for “The Queen, Our Duke”.


The Wrath of the Northmen

In the early 9th century Vikings began raiding what is now modern Normandy. All over Europe and the coast of the British Isles the Northmen poured out from Scandinavia sweeping down the channel in an orgy of pillage, rape & destruction. From AD 820 to approximately AD 920, the Viking incursions on the lower Seine became more and more frequent, resulting finally in some permanent colonisation and settlement. From c. AD 920 to AD 1020 Normandy saw further consolidation and settlement, with the influx of numerous Scandinavian settlers, before turning increasingly to the Kingdom of France. Slowly the ‘state’ of Normandy (the name is derived from the term used for the Vikings – ‘Northmen’) was taking shape.

The fiefdom of Normandy was created in 911 for the Viking leader Rollo (also known as Rolf).

After participating in many Viking incursions along the Seine, culminating in the siege of Paris in 886, Rollo was finally defeated by King Charles the Simple. With the Treaty of St.-Claire-sur-Epte, Rollo accepted to become a vassal to Charles III of France, converted to Christianity and was baptized with the name Robert. Charles then granted Rollo territories around Rouen.

Rollo and his immediate successors were styled as “counts” of Normandy. Some later medieval sources refer to them by the title dux, the Latin word from which the English word “duke” is derived; however, Rollo’s great-grandson Richard II was the first to assuredly be styled “Duke of Normandy”. 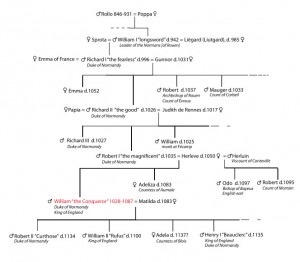 That most famous of the Dukes of Normandy, William the Conqueror (later of course William I), added the Kingdom of England to his realm after the Norman Conquest of 1066. Thus at a stroke the Channel Islands moved into the sphere and influence of England.

After the death of William the Conqueror, his eldest son, Robert Curthose, became Duke of Normandy while a younger son, William Rufus, became the King of England. After William’s death, because he was William II’s successor and because he had deposed Robert in 1106, Robert and William’s younger brother, Henry I, claimed both titles, Duke of Normandy and King of England, uniting them once again.

This situation of being both Duke of Normandy and King of England continued on through Henry’s heirs and successors until 1204 when under King John, King Philip II of France confiscated the Duchy of Normandy and subsumed it into the French crown lands. Only the Channel Islands remained under John’s control. In 1259, Henry III of England recognised the legality of French possession of mainland Normandy under the Treaty of Paris however claims to the throne of France continued right up until 1801 when they were formally abandoned when George III and Parliament, in the Act of Union, joined the Kingdom of Great Britain with the Kingdom of Ireland and used the opportunity to drop the obsolete claim on France. By that time, the French monarchy itself had been overthrown in 1792 with the establishment of the French Republic. The French revolution also brought an end to the Duchy of Normandy as a political entity, as it was replaced by several départements.

However the Channel Islands continued to see themselves as remnants of the Duchy and continued to call the monarch “Our Duke”. To this day Islanders owe their allegiance not to the British government but to the Queen of England through the sovereign’s ancient title of ‘Duke of Normandy’.


So why did Guernsey declare for England in 1204 ?

The English withdrawal in 1204 left the Channel Islands dangerously exposed, presenting islanders with a stark choice: to maintain their allegiance to the continent, or to side with the English Crown. They chose the latter, which was probably the most significant event in the island’s history.

So why England? Was it a simple question of patriotism? The reality is more complex: Norman landowners, or Seigneurs, across the Duchy sided with whoever brought them the most benefits. Pierre de Preaux, Norman ‘Lord of the Islands’ since 1200, owned land on both sides of the Channel. He fought for King John against France but was defeated by King Philip, at Rouen. Rouen was the centre of the Norman government and, with de Preaux’s surrender on 24 June 1204, his Lordship of the Channel Islands technically passed to France. Indeed, subjects of the King of France were already occupying the Islands, which then briefly belonged neither to John’s England nor to Philip Augustus’s conquered Duchy of Normandy. Guernsey’s constitutional, administrative and cultural evolution had begun and the island’s unique identity had been born.

The Channel Islands had become a strategic prize in the cross-channel power struggle. Sensing their economic and military value, Eustace ‘the Monk’ successfully attacked with some 30 ships, reclaiming the Channel Islands for England in September 1205. Guernsey’s fortification began, with the building of Castle Cornet at the entrance to St Peter Port harbour. However, the French soon recaptured the islands, followed by a steady, well-planned English recovery in July 1206. King John appointed Philip d’Aubigny warden of Guernsey in 1207, and also of Jersey five years later.

Meanwhile, Eustace had fallen out with King John and settled in Sark. d’Aubigny drove him from the island in 1214, only for Eustace’s brothers to occupy all the Channel Islands from 1215 to 1216. Eustace was finally defeated by d’Aubigny, at a sea battle off the south coast of England, and beheaded. An Anglo-French treaty forced the brothers to return the islands to England.

One reason for King John’s desire to retain the islands’ loyalty was their value as a base for a possible future invasion of Normandy. In order to cultivate this loyalty, he granted the islands certain rights and privileges they had enjoyed under previous Dukes of Normandy and, just to make sure, took hostages from some of the leading local families. In return he continued to govern in his capacity as Duke of Normandy. In 1254, Henry III granted the Channel Islands to his son, the future Edward I, on condition they should never be separated from the English Crown, and so the legitimate King of England came to be the legally recognised ruler of Guernsey. By the Treaty of Paris of 1259, although Henry abandoned the title of Duke of Normandy, his possession of the Islands was confirmed. This remains the position today, and Guernsey has never been incorporated into the English or United Kingdom.