Home » Technology » The Railway – Not just for Choo Choos

The Railway – Not just for Choo Choos

If you thought that the railway was invented along with the steam locomotive then you’d be wrong. Railways existed long before steam, long before even the birth of Christ.

It may come as a surprise that the use of railway lines goes back to the Ancient Greeks. In order to achieve audience-pleasing effects in classical theatre productions, rails were employed to bring scenery on to and from the stage at startling speeds. Examples remain at theatres in Sparta and Megalopolis. Such effects would have been impossible to achieve by other means, for transport by rail hugely reduces the power needed to move a load in comparison to wheels on a flat surface.

But it wasn’t just the luvvies of the ancient world who realised the usefulness of rail. From around 500 BC a railway system was also installed to carry boats over the river Isthmus in Corinth, It remained in use for over a thousand years. 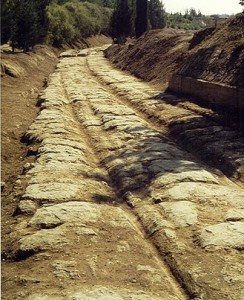 The modern railway finds it origins in mining. From around the 15th century , miners used wooden rails along which they pushed wagons, and the first known example was found in Germany, dating to around 1430. In the English town of Nottingham, mining entrepreneur Huntington Beaumont created a railway line to transport coal from mine to city in 1604, and in 1608 he did the same in Northumberland. Both schemes worked well, hut were unprofitable Nevertheless, he inspired many an imitator and can be said to be responsible for catalysing the development of railway in Britain.

Not much changed for a century or two. Iron rails were introduced in 1767, but it was the combined drive of two men that revolutionised the world of the railway. Englishman Richard Trevilthick was responsible for the first steam locomotive in 1804 and it ran along the Pen-y-Darren railway in Merthyr, Wales. The tragedy of his life was that people simply didn’t believe his ideas were worth anything. Disheartened, poor Richard left the country and eventually died penniless in 1833. 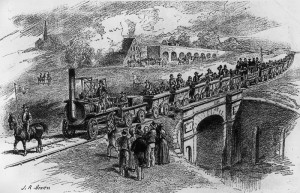 Not that Trevithick’s ideas weren’t taken up by others. Locomotives were developed in several stages, but it was George Stephenson who stood out from a host of would-be pioneers, opening the Stockton and Darlington Railway in 1825. It was the first railway in the world to carry stock and freight, and it was Stephenson’s idea of a national network that marks him out as the ‘genius’ behind the modern railway. During the following 25 years, railways sprung up all over the country, and by the 1850s over 6,000 miles of railway lines had been laid across Britain, with America, India, Russia and the rest of the world following suit.