Home » History » The Day the Gateway to the East was Renamed : When Constantinople became Istanbul

The Day the Gateway to the East was Renamed : When Constantinople became Istanbul

There has been a town on the Istanbul site since at least the 7th century BC, when it was settled by Greeks. They called it Byzantyium after the perhaps mythical Greek leader Byzas, who captured the land from wild Thracian tribes in 657 BC.

When Rome displaced Greece as the predominant power in the area, Byzantium became a free city under Roman overlordship, and only in AD 324, almost a millennium after its founding, did it finally become Constantinople.

On 18 September 324 the Western Roman Emperor Constantine defeated his rival Licinius at Chrysopolis to take command of the entire empire. After the battle he retired for the night to nearby Byzantium, where he dreamt that he saw the guardian deity of the city, an old crone, forlorn and failing from age and infirmities. Suddenly she was transformed into a radiant young woman, and in his dream he placed a diadem on her head. When Constantine awoke he interpreted his dream as a sign from heaven, and decided to found a great city on the site.

The Emperor shortly led a group of his assistants on foot around the outskirts of Byzantium (then a smallish town), tracing the boundaries of his new city with his lance. His assistants were astonished by its size, but, according to Christian hagiographers, the Emperor insisted :

“I shall advance till He, the invisible guide who marches before me, thinks proper to stop.”

Constantine immediately undertook a huge building programme, tripling the size of the city

Constantine immediately undertook a huge building programme, tripling the size of the city, and on 11 May 330 dedicated it as Constantinople (Constantinopolis), replacing Rome as capital of the empire.

Constantinople became the greatest city in the civilised world, but over the centuries it had to weather many storms, including a 6th-century plague that killed most of the inhabitants. It was attacked innumerable times, but thanks to its huge 5th-century walls, it remained unconquerable. 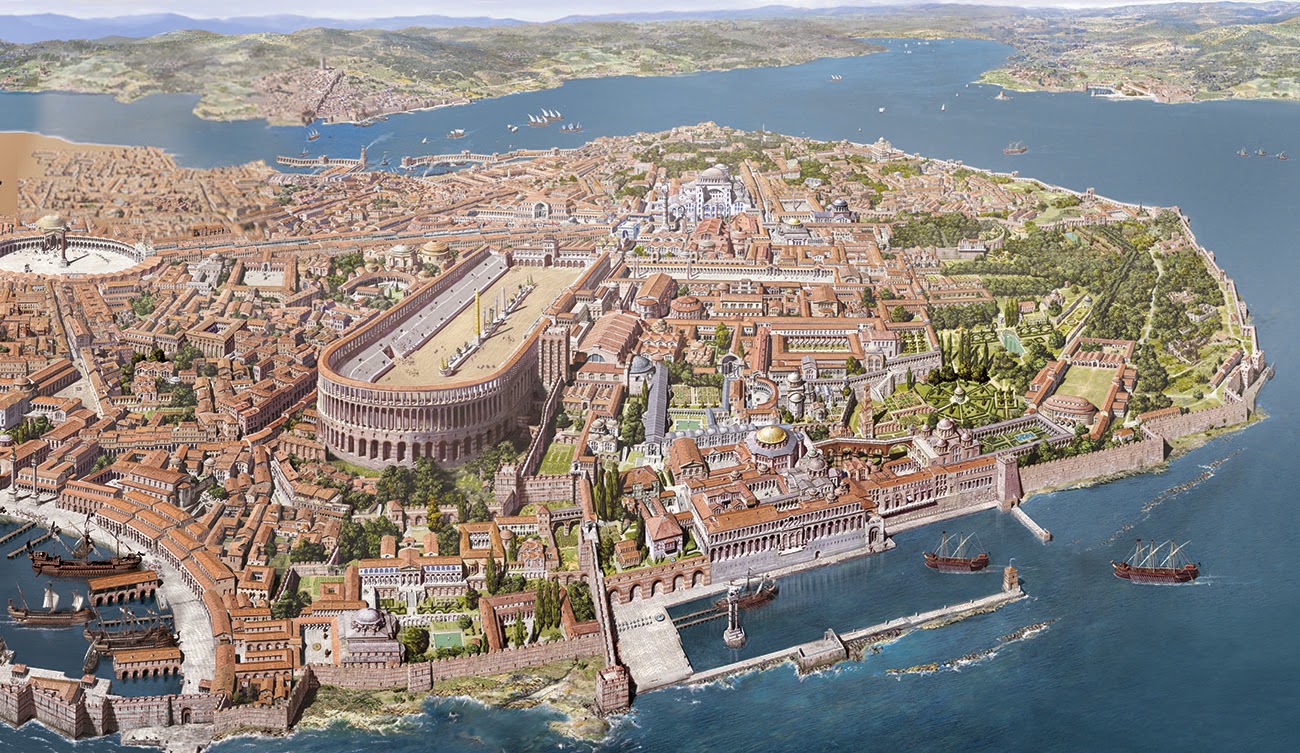 Constantinopolis replaced Rome as capital of the empire

By the 13th century, Anatolian Turks were already referring to Constantinople as Istinpolin, derived from the Greek phrase “eis ten polin” meaning ‘in the city’. But even after the Turks finally conquered it in 1453 it remained Constantinople to all but some of its own inhabitants.

Over the years the Turks increasingly called it Istanbul, as scarcely a reminder in the city of its Greek or Roman past remained. By the time of the official name change, no trace of Byzantium was left, and the only remnant of the Great Constantine was the eponymous burnt porphyry column that still draws the gazes of tourists in Old Istanbul.