Home » General Interest » The Rise of Football – The Beautiful Game

The Rise of Football – The Beautiful Game

Published on Sep 8, 2015 in General Interest

WHERE IT ALL BEGAN : ANCIENT BALL GAMES 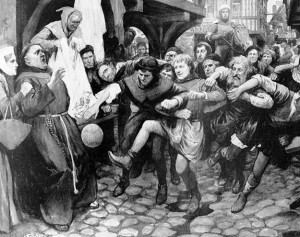 Four thousand years ago the Egyptians were playing catch or casual kicking games with balls made of leather or linen and stuffed with reeds or straw. A kind of football may have been played in ancient China around 200 BC. Here t’su chu – literally, ‘to kick a stuffed leather ball’ – was enjoyed by players who attempted to kick the ball through a hole in a silk net.

Two teams were needed for episkuros, a popular ball game in ancient Greece and later in Rome, where it was known as harpastum or pila pedalis.

One Roman stone tablet from the 2nd century AD, discovered at Sinj in modern-day Croatia, shows a man holding a football made up of hexagonal sections.

The Roman legions may well have brought football to northern Europe; certainly by the 12th century a lawless, violent type of football was common in Britain. The ball was an inflated pig’s bladder encased in leather. Shrove Tuesday was a traditional day for football, and in such Roman cities as Chester the game was said to have been played to commemorate the Romans’ departure.

We know that feuds between football teams and their fans were a concern to medieval monarchs beacuse in 1314 Edward II proclaimed:

‘Forasmuch as there is a great noise in the city caused by hustling over large balls, from which many evils may arise, which God forbid, we command and forbid, on behalf of the King, on pain of imprisonment, such game…’

The name of the game first appeared in an Act passed in 1424 forbidding the game of ‘fute ball’.

Football was a brutal game in the 16th Century. According to Puritan Philip Stubbes, in his Anatomie of Abuses of 1583, it …

In the 17th century a violent version of football was still being played at schools such as Eton and Winchester and only in 1848 did Cambridge University attempt to standardise rules for a safer eleven-a-side game.


The Football Association (FA) was set up in 1863, when representatives of clubs and schools began the task of establishing a set of rules. By 1871 FA membership consisted of 30 clubs from London and the Home Counties. The following year the first FA Cup final was held at the Oval cricket ground, London : Wanderers beat the Royal Engineers 1-0. The desire for regular matches and payment for players led a dozen clubs to form the Football League in 1888. The word ‘soccer’ is derived from 1890s’ Oxford University student slang for ‘Association’.