The Science of Tea Making

Only in Britain would this be of interest or concern. There’s even a British Standard related to the desired ratio of milk to water. So let’s look at a few key concerns of “Teaologists” (I made that last bit up, in fact the actual study and blending of tea is called “Cha Dao” – which means “the Way of Tea.”)

Is there any real benefit in warming the pot before making tea?

Many people seem convinced that swilling boiling water around the pot and then pouring it away is a key part of making the perfect cup of tea. The idea behind this is that it helps the pot stay hotter longer, ensuring a better brew, (given the thermal inertia of the average teapot (ie the time it takes to really warm up and get going), it is doubtful that this ritual makes much difference. More likely however, is that it removes any of the bitter tasting tannins remaining in the pot from the previous brew.

Should the milk be put in before or after the tea?

Some say that “milk first” is a tradition based on the need to protect thin china cups from the thermal shock of hot water, while chemists have argued that milk-first combats the production of bitter compounds as the tea brews. British Standard BS 6008: “Method for Preparation of a Liquor of Tea” calls for milk to be put in first, in the ratio of 1.75 ml of milk for every 100 ml of tea, which is barely a teaspoonful per cup. However it seems only wise to match the amount of milk to the strength of the brewed tea – which can only be judged once you’ve seen it poured into the cup. I therefore count myself among the milk-after camp, along with George Orwell (of ‘1984’ and Animal Farm’ fame), who in 1946 wrote an article on tea in the London Evening Standard.

We should point out that the above standard is talking about the adding of milk THEN brewed tea not the modern “madness” of adding the milk to the mug along with the tea bag and boiling water. Which prevents the proper infusing of the tea leaves which occurs between 97C – 100C.


So how do you make the perfect brew? 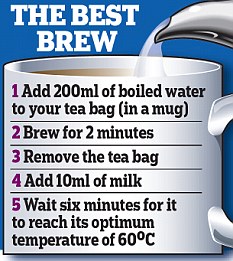 Apparently making the perfect mug of tea isn’t an art but a science according to researchers at the University of Northumbria.

In a nutshell they concluded :

They even devised a mathematical formula for the ideal brew which shows that it is best drunk exactly six minutes after being made with an optimum brewing time of two minutes and an ideal amount of milk of 10ml.

The formula is read as : The perfect cuppa (@ Optimum temperature of 60C) is achieved by adding the Tea Bag to water @ 100C for a Brew Time of 2 minutes; remove the tea-bag; then add 10ml of milk; then stand for 6 minutes.


The Reasoning behind the Science …