Our Universe is a remarkable place and not a little odd in some of the ways it works. For instance have you ever heard of left and right handed molecules ? Or been told that, chemically speaking, an orange is a ‘left-handed’ lemon!

WHEN LEFT CAN BE RIGHT AND RIGHT CAN BE WRONG

It’s a curious fact that the molecules chiefly responsible for the respective smells of spearmint and caraway seeds are exactly the same, except for one crucial difference … they’re mirror images of the same molecule, carvone. 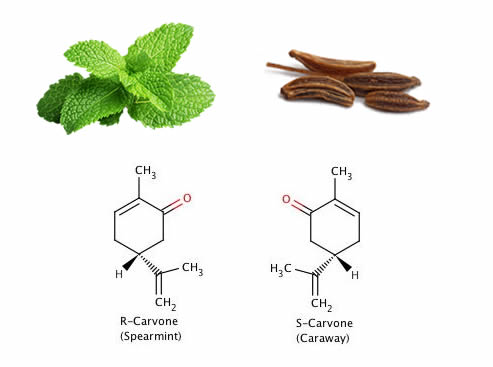 This feature in chemistry is known as chirality, from the Greek word cheir meaning hands

This feature in chemistry is known as chirality, from the Greek word cheir meaning hands. Your hands are chiral. Your left hand is the mirror image of your right but you can’t superimpose one upon the other.

So, in relation to carvone we might say that the right-hand version is responsible for the smell of caraway seeds and the left-hand version is responsible for that of spearmint. This rather implies that our smell receptors are chiral too, otherwise we wouldn’t be able to distinguish between the two molecules and caraway and spearmint would therefore smell the same. Think of each molecule as a yale key and the other as its mirror image. Both keys won’t fit the same lock.

It was Louis Pasteur who first noticed this feature when, using just a pair of tweezers, he painstakingly separated two different forms of tartaric acid crystals – left- and right-hand versions- and discovered they each rotated polarised light to the same degree but in opposite directions. A 50:50 mixture produced no effect at all, the two cancelling each other out.

The Bad Side of Chirality

Chirality crops up in all sorts of areas of nature … it can have adverse side effects. This is exactly what happened with the drug thalidomide in the late 1950s

Chirality crops up in all sorts of areas of nature, including drug synthesis. When a drug such as ibuprofen is made it typically comprises a mixture of left- and right-hand versions, called a racemic mixture, which can have important consequences. It’s highly likely that only one of these two forms will do the job it’s intended to do. The ideal scenario would be that the other version has no effect whatsoever and is eventually excreted by the body. But at worst, it can have adverse side effects. This is exactly what happened with the drug thalidomide in the late 1950s. It was administered as an anti-nausea drug to pregnant women in its racemic form. Disastrously, the left-hand version of the molecule caused defects and deformities in fetuses growing in the womb. Drug companies now pay a significant amount of attention to the effects different chiral versions of the drug they manufacture produce, spending vast amounts of money on producing versions that include the drug in only its pure right or left-hand form.