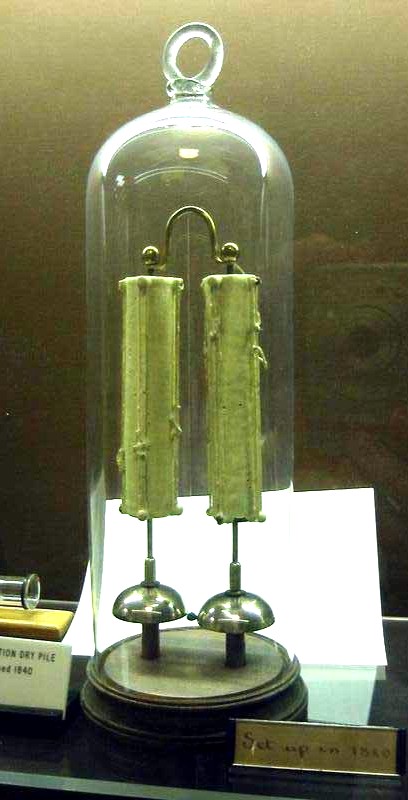 In a physics lab at the University of Oxford there is a battery that has been powering a metal ball ringing two bells for a staggering 175 years and nobody knows why it has been able to run for so long! And it’s likely to remain a mystery as any attempt to investigate it could accidentally stop it working.

It’s a dry pile battery, which is one of the first electric batteries invented by a Giuseppe Zamboni during the 1800s. They use alternating discs of silver, zinc, sulphur, and other materials to generate low currents of electricity. Being a dry pile battery, it’s got a paste inside with a minimum amount of water needed for the electrolyte to work. The battery is covered with an insulating layer of molten sulphur, in order to protect against atmospheric damage (i.e. moisture).

It’s connected in series at their lower ends to two bells. It’s theorized that the interior contains thousands of discs made of manganese dioxide and zinc. Between the bells is suspended a metal sphere or ‘clapper’ about 4mm in diameter which is attracted alternately by the bells and transfers charge from one to the other due to an electrostatic force, maintained by the ringing of the bells. The process is repeated over again and again. The frequency of its oscillation is about 2Hz and so far the bell would have rung roughly 10 billion times, and probably more than that, calculations from the university suggest.