They called the galoshes ‘Zippers’

No one thought of anything even a little bit like the zipper until Whitcomb L. Judson came along. There were buttons and button-holes, hooks and eyes, laces, buckles. They all took an irritatingly long time to do up, especially when men wore high-laced boots and fashionable ladies squeezed themselves into long corsets.

Whitcomb L. Judson’s slide-fastener was an out-of-the-blue invention, and no one knows what gave him the idea. No one even knows much about him, except that he was a mechanical engineer living in Chicago and that he patented other inventions, to do with a street railway system and motor-cars.

Judson invented the first zipper (called, at the time, a Clasp Locker or Unlocker) in 1891. This ingenious little device looks so simple, and the principle behind it is simple: one row of hooks and eyes slotting neatly into another row by means of a tab. Yet it took twenty-two years, many improvements and another inventor to make the zipper really practical.

The zipper had to be produced cheaply, because no one would pay a lot of money for it. So Judson invented a machine to mass-produce his slide-fastener. But the machine was terribly complicated and kept on breaking down. In 1905 Judson invented a new fastener, the C-curity, which was easier to manufacture. Clothing manufacturers, however, were not the least bit interested in trying out the fasteners, so the only way Judson could get them on to the market was by letting pedlars sell them from door to door as novelties. Moreover, the C-curity was stiff and clumsy, and had a bad habit of bursting open at inconvenient times.

Gideon Sundback, a young Swedish engineer, came to work for Judson’s struggling company. He thought hard and decided that the interlocking parts needed to be much smaller to give the fastener greater flexibility and to stop it bursting open. After several attempts, Sundback invented in 1913 a really practical fastener which is in all important ways the same as the one we use today. He also invented the necessary machinery to manufacture it cheaply.

Clothing manufacturers still refused to use the fastener. But in 1918 an inventor showed the American army a flying suit he had invented which happened to use the slide-fastener. The army put the suit through such tough tests it disintegrated – all except the fastener! A Navy officer happened to see the tests, and Judson’s unknown little company got an order for 10,000 fasteners. Next, Judson’s invention was used in the manufacture of gloves and tobacco pouches. Then B. F. Goodrich & Company put the fasteners into their rubber galoshes. They called the galoshes ‘Zippers’ – which is how the slide-fastener got its popular name. 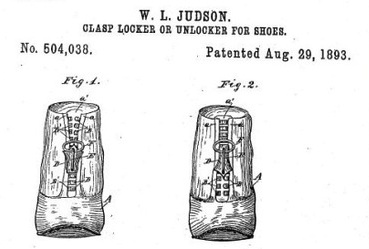