To Discover Strange New Worlds – Columbus’ Venture into the Unknown 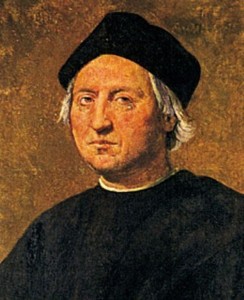 Wednesday October 12th 1492 was no ordinary day, for on this day Christopher Columbus reached the New World.

On that day, after sailing across the Atlantic Ocean, the Italian explorer sighted a Bahamian island, believing he had reached East Asia. His expedition went ashore that same day and claimed the land for Isabella and Ferdinand of Spain, who had sponsored his attempt to find a western ocean route to China, India, and the fabled gold and spice islands of Asia.

How did the Ancient Greeks know the Earth was round?

It’s still possible to find history books which blithely talk of how Columbus first showed that the Earth was round but as early as the 4th century BC, Aristotle was declaring that “The sphericity of the Earth is proved by the evidence of our senses. He put forward several different ways of showing that we live on a giant ball. For example, explorers reported new patterns of stars corning into view in the night sky and familiar ones vanishing over the horizon as they travelled further from home, no matter which way they went. Even more tellingly, as a ship approached its home port, those waiting for it would not see just a tiny ship in the distance getting ever larger but would first see the tip of its mast and then ever more of its hull – just as if it were sailing over the crest of a globe. A century later, Eratosthenes succeeded in measuring the circumference of the Earth. By observing the length of the sun’s shadow from two different cities on the same day of the year, he found a figure of around 28,500 miles – within 15% of the true value of 25,000 miles. Columbus, in contrast based his expedition plans on the far smaller figure of 18,500 miles -probably as a ruse to increase his chances of sponsorship.

Columbus was born in Genoa, Italy, in 1451. Little is known of his early life, but he worked as a seaman and then a maritime entrepreneur. He became obsessed with the possibility of pioneering a western sea route to Cathay (China), India, and the gold and spice islands of Asia. At the time, Europeans knew no direct sea route to southern Asia, and the route via Egypt and the Red Sea was closed to Europeans by the Ottoman Empire, as were many land routes. Contrary to popular legend, educated Europeans of Columbus’ day did believe that the world was round, as argued by St. Isidore in the seventh century. However, Columbus, and most others, underestimated the world’s size, calculating that East Asia must lie approximately where North America sits on the globe (they did not yet know that the Pacific Ocean existed).

With only the Atlantic Ocean, he thought, lying between Europe and the riches of the East Indies, Columbus met with King John II of Portugal and tried to persuade him to back his “Enterprise of the Indies,” as he called his plan. He was rebuffed and went to Spain, where he was also rejected at least twice by King Ferdinand and Queen Isabella. However, after the Spanish conquest of the Moorish kingdom of Granada in January 1492, the Spanish monarchs, flush with victory, agreed to support his voyage.

in March 1493 he returned to Spain with gold, spices, and “Indian” captives

On August 3, 1492, Columbus set sail from Palos, Spain, with three small ships, the Santa Maria, the Pinta, and the Nina. On October 12, the expedition reached land, probably Watling Island in the Bahamas. Later that month, Columbus sighted Cuba, which he thought was mainland China, and in December the expedition landed on Hispaniola, which Columbus thought might be Japan. He established a small colony there with 39 of his men. The explorer returned to Spain with gold, spices, and “Indian” captives in March 1493 and was received with the highest honours by the Spanish court. He was the first European to explore the Americas since the Vikings set up colonies in Greenland and Newfoundland in the 10th century.

He was the first European to explore the Americas since the Vikings set up colonies in Greenland and Newfoundland in the 10th century.

During his lifetime, Columbus led a total of four expeditions to the New World, discovering various Caribbean islands, the Gulf of Mexico, and the South and Central American mainlands, but he never accomplished his original goal—a western ocean route to the great cities of Asia. Columbus died in Spain in 1506 without realizing the great scope of what he did achieve: He had discovered for Europe the New World, whose riches over the next century would help make Spain the wealthiest and most powerful nation on earth.