Home » Science » What Causes the Pull of Gravity ?

What Causes the Pull of Gravity ?

One of the most common and baffling science questions is “how does gravity work?”. If you too find yourself confused then rest assured you’re in good company … even Sir Isaac Newton admitted he was baffled by gravity.

You might have thought that the formulator of the Law of Universal Gravitation would have had a grip on the subject but not at all. Newton’s public stance, set out in 1713 in his most famous book, the seminal Principia Mathematica, was that :

“I have not been able to discover the cause of those properties of gravity from phenomenon, and I frame no hypotheses … to us it is enough that gravity really does exist”.

So there. Privately, Newton seems to have regarded gravity as a manifestation of God’s all-pervading spirit, which he knew would cut little ice with his scientific rivals.

However it was thanks to Newton that we know that any two objects in the universe that have mass exert a gravitational pull on each other. The greater the mass and the closer the two objects are, the stronger the force of gravity. Indeed it was this knowledge plus the formulae he derived to describe this behaviour , the famous F = m x a, that put a man on the moon.

The key mystery is how a mass like the Earth can affect distant objects through the vacuum of space.

Einstein supplied the answer in 1915, in his General Theory of Relativity. This viewed gravity as distortions caused by mass in the very fabric of space and time. It is a very deep idea, as all our perceptions of motion and force are intimately tied to our view of space and time as being unchangeable. 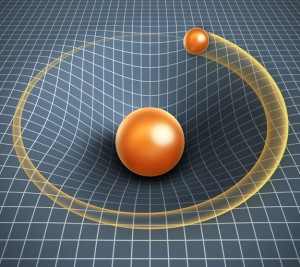 In Einstein’s theory, gravity isn’t a force, but rather, the consequence of the fact that matter warps space-time.

He says that we must therefore give up the idea of gravity as a force and instead think of gravity as being the result of curving space and time. The result being that it creates the impression of objects being attracted to each other. Roughly speaking, Einstein is saying that we believe gravity to be a force because our measurements of the fall of an apple are consistent with the characteristics we expect of one. What’s actually happening, however, is that our measurements of space and time have been distorted by gravity to create those characteristics. 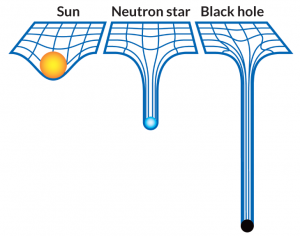 To express this another way he said that we need to think that gravity is simply a curvature in space-time created by an object with mass pretty much in the same way a piece of cloth would be curved if it was stretched out and a heavy object was placed on it. This curvature in space created by an object with greater mass than the objects surrounding it would cause these objects of lesser mass to fall toward the more massive object. We would then see and measure this and we call it gravity.


So what about the Higgs Boson Particle – How does that fit in ?

The short answer is that it doesn’t! At least not with our original question that is.

The Higgs boson or Higgs particle, sometimes described as the ‘God particle’, that was discovered at CERN on 4 July 2012 is an elementary particle.

Strictly speaking though the Higgs boson is the materialization of the Higgs Field. The Higgs field is responsible for giving everything its mass, so you might reasonably expect there to be some deep connection between the Higgs boson and gravity, right? … wrong! The Higgs Boson explains mass but does not cover gravitation.

At guernseydonkey.com we don’t pretend to understand all this so the best we can do is refer you on to someone else … so we hope that this helps.


That said all of the above only brings us to our current understanding. Gravity still remains one of the biggest mysteries of physics and the biggest obstacle to a universal theory that describes the functions of every interaction in the universe accurately. If we could fully understand the mechanics behind it, new opportunities in aeronautics and other fields would probably appear.