Home » History » What drove the great migrations of the first millennium AD?

What drove the great migrations of the first millennium AD?

A curious thing occurred between 400-800 AD. In Europe and the far east, particularly China, a serious of mass population movements and incursions occurred. What historians are debating today is what caused these massive migrations. They don’t really know why theses exoduses lasted so long, or why some groups settled (often in places that seem incongruous based on their origins) and others went on almost to the other end of the Eurasian landmass.

What we do know is that there were catastrophic consequences, the Roman empire collapsed because of ‘barbarian’ invasions and outside of Europe the Han empire in China collapsed around the same time for the same reasons. So what drove people to act as they did ?

Some historians emphasise fear. Changes in climate or epidemics may have made aggressive neighbours more powerful and forced tribes out of their native lands. When fleeing, these tribes in turn came across others less skilled in war – or maybe simply unaccustomed to the kind of warfare they were facing. These groups could then be robbed and plundered, and in some cases subjugated to form new states. The Huns, who hit Europe and the Middle East in the late third century, were probably driven west. But having previously lost the contest for resources in their native central Asia (somewhere around where the western part of Mongolia is now), they were victims no more. Attila, their chief, became one of the greatest (and most brutal) conquerors the world has seen.

Other historians talk about the push of groups coming out of central Eurasia (roughly the area between Mongolia and the Caspian Sea), which forced other nations east, west and south. This may explain the Germanic invasions of western and southern Europe. Forced from their homelands in the east, the Germanic peoples invaded other territory occupied by peoples who seemed weaker – or at least a less fearsome alternative to those pushing from the east. It was as if there was a great central Eurasian conveyor belt of peoples sending different groups off east towards China, west towards the Roman empire and south towards India. These invaders in turn pushed other peoples ahead of them, which then – in some cases – broke into established empires for protection. 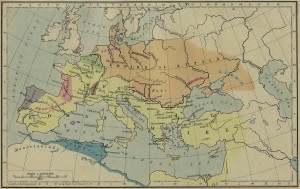 The Volkerwanderung, as the Germans call it, or the great migration of the peoples, made some groups fetch up in the strangest of places, as modern DNA research reveals. Persian-speaking Alans ended up in what is today north-eastern France and Belgium – their genes are still left in the population, although their language has disappeared.

Germanic Vandals went to north Africa, where they constructed an empire-, the local Berbers still carry a very high percentage of their genetic composition. For a while migration became the done thing – even peoples who had been settled for a very long time got the taste for it, as opportunities opened up.

The ‘conveyor-belt’ idea isn’t universally accepted. Another group of historians argue that the weakness of empires created the migration period, rather than events working the other way around. People began breaking into the rich lands of the east, west and south because they could, because the empires that held these lands had become too weak to defend their territories.

In this theory, there is a combination of climate change, epidemics and shifts in military power causing imperial instability. This decline of empires in turn created unwanted immigration. Power protects. Weakness invites others in.


In the end the truth is that … We don’t know why!