Home » General Interest » What Other Animals, Beside Man, Use Tools?

What Other Animals, Beside Man, Use Tools?

We’ve known for some time now that primates, such as Chimps, are able to use primitive tools to prepare food for eating, such as breaking open nuts to get at the nutrition inside, or self-defence or using tools as cover from rain. Chimpanzees have been the object of study, most famously by Jane Goodall, since these animals are more-often kept in captivity than other primates and are closely related to humans. However there are other animals that use tools, one of which may completely surprise you… 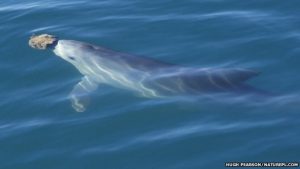 In a marine first, scientists have discovered that some of the dolphins that live in Shark Bay, Western Australia ‘have learned to use tools’ to help them catch fish.

At least 25 of the animals have been spotted ‘sponging’, as the practice has become known, which involves wearing conically shaped whole sponges, which they tear off the sea bottom, on the ends of their noses. This equips them with the marine equivalent of a hard hat to protect their noses while they forage on the sea bed.

Interestingly, the dolphins involved in the practice seem to be overwhelmingly female, and appear to be passing the idea on to their daughters. And the males? According to Dr Michael Krutzen, who first described the sponging behaviour while working at the University of New South Wales, the males are too busy foraging for females to waste time poking around on the seabed.


Clearly, dolphins are a lot more like humans than we give them credit for.