Home » Science » What’s stopping us falling through the floor?

What’s stopping us falling through the floor?

Why is it that we don’t fall through the floor?
What’s stopping us ?
Stupid question, surely ?
A Stupid Question ?

In our everyday experience, floors are solid surfaces whose only function in life is to stop us falling through them. It is the least we can ask of them. So what underlies such a ‘stupid’ question ?

In this case, since floors are made of atoms it is an understanding of the nature of atoms which we must consider in relation to this question. 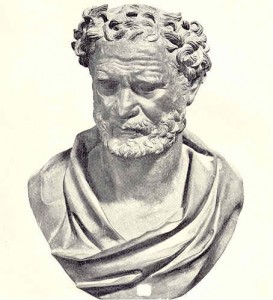 The concept of atoms as the basic building blocks of matter has been around since the Ancient Greeks some 2,500 years ago. However until the late 19th and early 20th Century atoms have been imagined rather than understood. Their real nature has only been surmised as solid hard balls. It was only in the twentieth century that a more accurate or definitive picture of the atom emerged, a picture that is full of puzzles and shows the limitations of trying to think of physical and mathematical concepts as pictures at all.

Today, the ‘picture’ of an atom based on a century of scientific research, is of a hard nucleus one ‘unit’ across (we’ll come to what I mean by unit in a moment) surrounded by a cloud of much lighter particles, electrons, out to a radius of about 30,000 units or more. More than 99.9 per cent of the mass of the atom is concentrated in the nucleus and so between the nucleus and the outer ‘surface’ there is very little else. Even the electrons are not really ‘there’. Although they can sometimes behave like tiny solid balls themselves, they are actually understood by scientists as a cloud of varying density with the densest part of the cloud being where the electron is most likely to be found. The only time an electron ‘exists’ is if a scientist using some delicate piece of apparatus is able to bounce another electron or some radiation off it. At that point, not only would its position be known, it would actually materialize as a result of the observation, before disappearing again into a cloud of probabilities.

We’re now in the very strange world of quantum mechanics where the location of an electron is a probability, measuring either it’s momentum or location affects the other reading, where things behave as both waves and particles. However we won’t let this put us off trying to see why the question of ‘why don’t we fall through the floorboards?’ might not be stupid after all.

It’s as if an person living in England were represented by a cloud that was very dense in the area of his home less dense in the shopping mall near his home, even less dense around his gym, and extremely rarefied in the slums of Glasgow or at the top of Ben Nevis. But he himself would be nowhere, until someone actually bumped into him, when the cloud would condense instantaneously to reveal a 43 year old man wearing a jeans and t-shirt.

Back to the atom…

99% of the volume is empty space

If the nucleus were the size of an orange 10 centimetres across, the edge of the electron cloud – the point beyond which the probability of finding an electron was vanishingly small – would be between 3 and 30 kilometres away. So in any solid made up of atoms – a floorboard, say – 99% of the volume is empty space, like a vast plain with oranges scattered several kilometres apart, and electron clouds with very little mass drifting around.

In reality the unit that is used to measure atoms is called a femtometre, one thousand million millionth of a metre. The nucleus is about 2 femtometres across, and the atomic radius is about 100,000 femtometres, so it would take 10 billion atoms to form a line a metre long.

Now, at least, we might be able to see the point of the question ‘What’s stopping us falling through the floor?’ In fact, it may have more point than you might at first think. Not only is the ‘solid’ floor largely empty space, the shoe or foot that stands on it is also made up of atoms, with the same vast proportion of emptiness to mass. Why don’t these two assemblages largely made up of empty space just pass straight through each other, like two fleets of ships spaced several kilometres apart proceeding in opposite directions down the English Channel?

The answer to the question lies in the commonsense – but mistaken – definition of what ‘solid’ means. If we take the word to mean a space entirely filled with mass, then floors can seem very insubstantial. But we need to build into our understanding another characteristic of atoms, force fields that surround the nucleus. When two atoms are near each other they are affected by forces, one that attracts and one that repels. As one atom approaches the other, it reaches a point where the two forces exactly balance, and it is held firmly in that position. In an assembly of atoms, locked together by these forces in a solid like a floorboard, any other atom that tried to prise them apart would also reach a point of equilibrium where to go any further would mean overcoming a strong repulsive force, far greater than the gravitational force pulling the foot down to the floor.

So next time you walk across the room, imagine that your feet and the floor are pushed a tiny distance apart by the strong repulsive forces of the atoms, and that’s why you don’t fall through the floor.