Home » General Interest » When an animal looks in a mirror, does it realise that it is looking at itself?

When an animal looks in a mirror, does it realise that it is looking at itself?

When an animal looks in a mirror, does it realise that it is looking at itself? – this is really a question of self-awareness. So if any animals, apart from ourselves, do actually know this we then have to ask – Which, if any, animals successfully make this connection? 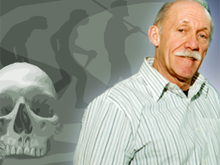 He anaesthetised chimpanzees, then marked their faces with blobs of non-toxic paint. The chimps were given mirrors to look in when they woke up.They saw the blob in the mirror, touched it and cleaned it off.

Apparently orangutans can also do this, but this behaviour has so far not been recorded in gorillas, monkeys or any other animal apart from humans. 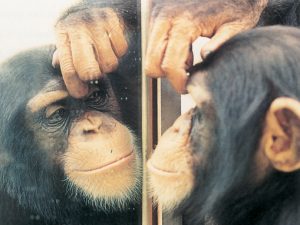 Besides the experiments that involved marking faces, others researchers devised experiments in which the animal was urged to do something with its hand, which was hidden behind a screen, while being shown a television picture of its hand in reverse.

Chimps learned to manage the task by looking at the screen and moving their hand in a trial-and-error strategy guided by visual feedback. Other tasks investigated whether the animal recognised itself in a videotape image, a photograph, or even its own shadow.

Macaques and other less intelligent primates have not yet displayed the self-recognition abilities of apes and humans.

Generally birds regard their reflections as another individual of its own kind and do not realise that they are looking at themselves. Several species of territory-defending Australian birds will spend lengthy periods attacking their reflection in, for example, the wing mirror of a vehicle, or hubcaps.

Of course, all these experiments are behavioural tasks which cannot access the mind states of these animals directly and prove if they really do recognise themselves. Some researchers are therefore still sceptical.


Incidentally, human babies normally learn to recognise themselves in a mirror at between 12 and 20 months.