Home » History » Who was Guy Fawkes?

Who was Guy Fawkes?

Every year in Britain on November 5th, thousands of us make life-size effigies of one of the most infamous men in British History – Guy Fawkes. We then proceed to set him on fire and then let off lots of fireworks to celebrate the foiling of a dastardly Catholic plot to blow up both Parliament and the then king, King James I. But who was Guy Fawkes and what do we know about him ?

In this article we explore the life of the conspirator most closely associated with the foiled plot.

We’re not entirely sure when he was born exactly but there are records that he was baptised on 16 April 1570 at St Michael le Belfrey church in York, so ita likley he was born earlier in April 1570. Fawkes’s father, Edward Fawkes, worked for the Church of England, and his mother was named Edith. In 1568, before Guy was born, Edith gave birth to a daughter who died several weeks later. Guy had two sisters who lived into adulthood, named Anne and Elizabeth. Guy’s father died when he was a child, and after this his mother remarried. Guy’s stepfather was named Dionis Bainbrigge.

Despite his birth parents being Protestants, when Guy’s mother remarried after his father’s death in 1579, he became influenced by his stepfather’s Catholic practices. In spite of it being a crime to be a Catholic during Elizabeth I’s reign, Guy converted to Catholicism during his teenage years.

In 1592, Guy sailed overseas to join the Catholic Spanish army, which was fighting the Protestant Dutch forces over the control of the Netherlands. By 1603, Guy had risen through the ranks of the Spanish military and was recommended for a promotion to captain.

It was during his time abroad that Guy adopted the Italian name ‘Guido’, and he developed a great knowledge of the use of gunpowder.

In 1603, Guy travelled to Spain and petitioned the Catholic king, Philip III, to wage war against England and the new Protestant king, James I and VI. However, Philip declined Guy’s petition.

While fighting in Flanders for the Spanish in around 1604, Guy met Thomas Wintour, a fellow disgruntled English Catholic. Wintour encouraged Guy to join a group of conspirators in a plot to assassinate the king. 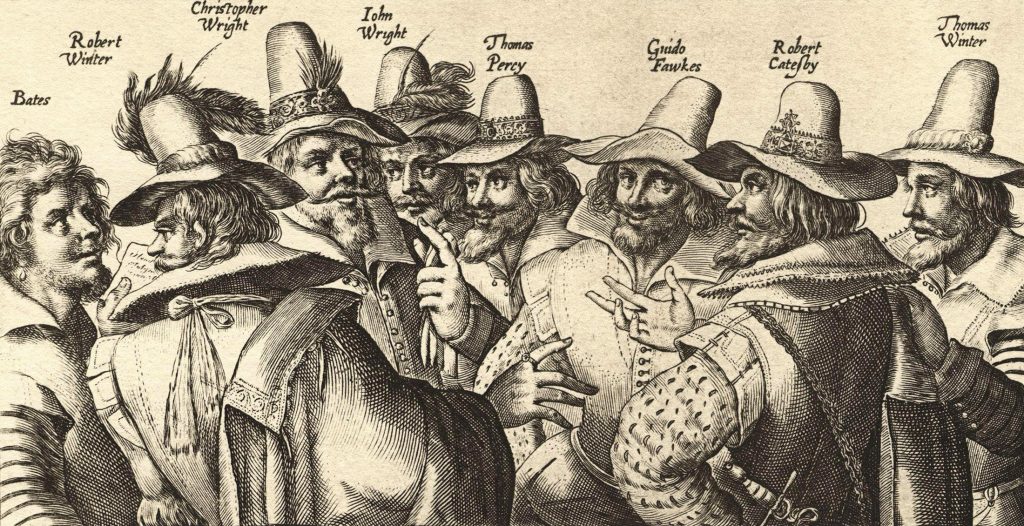 For 18 months, Guy and 12 others calculated a plan to blow up the House of Lords, kill the king, and replace him with a Catholic alternative. In order to do this, the group transported 36 barrels of gunpowder to the cellar below parliament, and planned to set the gunpowder alight when James I opened parliament on 5 November 1605.

However, the plot was foiled by Robert Cecil – James I’s dedicated minister. On 4 November 1605, Guy was caught in the cellar while guarding the gunpowder, and was arrested for his involvement in the plot.

During his imprisonment in the Tower of London, Guy was continuously tortured for two days. Finally, Guy admitted his involvement in the plot and signed a confession. He signed his name ‘Guido Fawkes’. After his confession, Guy apparently remarked that he had collected so much gunpowder in order to “blow you Scotch beggars back to your native mountains”.

Despite attempting to kill the new king of England, James I apparently praised Guy for being dedicated to his cause and for having a “Roman resolution”.

Guy was sentenced to death by being hanged, drawn and quartered ­– a typical ‘traitor’s death’ at the time. On 31 January 1606, Guy took to the scaffold in Westminster in London. It has been suggested that after the noose had been placed over his head, Guy purposely jumped from the scaffold in order to break his neck. By doing this, he avoided being cut down after being hanged and having his organs cut from his body while still alive.

Guy’s dead body was cut into quarters and sent to different parts of the country, where they were put on display for the public to see.

The story of Guy Fawkes and the Gunpowder Plot has continued to be told ever since, and in the 19th century it became customary to burn an effigy of Guy Fawkes on a bonfire every year on 5 November to mark the failure of the plot.