Home » General Interest » Why do Boomerangs come back?

Why do Boomerangs come back? 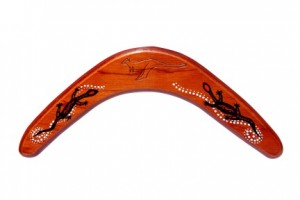 Boomerangs are commonly thought to be the invention of Aboriginal Australians but over the years they have turned up at archaeological sites as far apart as Arizona and India; the oldest known specimen, around 23,000 years old, carved from mammoth tusk, was found in a cave in Oblazowa Rock, southern Poland in 1987. It thus seems that the spectacular flying abilities of boomerangs have been independently discovered many times. 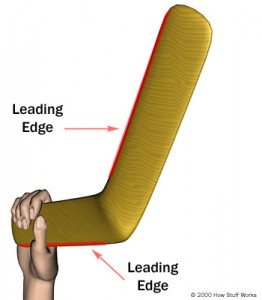 Despite their prehistoric origins, their aerodynamics are anything but primitive and exploit an ingenious combination of lift and spin. To provide the lift, the boomerang is launched from an almost upright position, at an angle of around 15 degrees to the horizontal. This allows it to spin and cut through the air at an oblique angle, deflecting it and generating lift as it goes. The famed ability of the boomerang to return home again comes from the fact that, because of its spin, the upper part of its “wing” cuts through the incoming air at a relatively higher speed than the lower part and thus generates more lift. This creates a turning force on the boomerang, which starts to follow a circular path, rather like a spinning toy gyroscope slowly pirouetting on its stand.

Oddly enough, just how big a circular path the boomerang follows doesn’t depend on how hard it’s thrown, or how fast it spins: it’s fixed primarily by its wingspan and shape, which are a compromise between spin and lift. Thrown well, boomerangs will happily fly long, looping trajectories of over 400 ft.