Why do the Brits drink so much tea ?

As a nation the Brits certainly do drink a lot of tea, 165 million cups daily or 60.2 billion per year.

Tea isn’t native to the British Isles so how did this come about? It certainly is an interesting story involving a Portuguese princess who was a tea addict, smuggling and even revolution. In the article below we look at a brief history of that quinessentially British brew.


The Birth of Tea in China

The British are newcomers when it comes to drinking tea

The story of tea begins in China. According to legend, in 2737 BC, the Chinese emperor Shen Nung was sitting beneath a tree while his servant boiled drinking water, when some leaves from the tree blew into the water. Shen Nung, a renowned herbalist, decided to try the infusion that his servant had accidentally created. The tree was a Camellia sinensis, and the resulting drink was what we now call tea.

It is impossible to know whether there is any truth in this story. But tea drinking certainly became establishedin China many centuries before it had even been heard of in the west.

By the time of the Tang dynasty (618-906 AD), tea had became firmly established as the national drink of China.

It became such a favourite that during the late 8th century a writer called Lu Yu wrote the first book entirely about tea, the Ch’a Ching, or ‘Tea Classic’. It was shortly after this that tea was first introduced to Japan, by Japanese Buddhist monks who had travelled to China to study. Tea drinking has become a vital part of Japanese culture, as seen in the development of the Tea Ceremony, which may be rooted in the rituals described in the Ch’a Ching.


The Growth of Tea in Europe

It wasn’t until the latter half of the 16th century that there are the first brief mentions of tea as a drink among Europeans. These are mostly from Portuguese who were living in the East as traders and missionaries.

It was the Dutch who first introduced tea to Europe

But although some of these individuals may have brought back samples of tea to their native country, it was not the Portuguese who were the first to ship back tea as a commercial import. This was done by the Dutch. In the last years of the 16th century the Dutch began to encroach on Portuguese trading routes in the East so that by the turn of the century they had established a trading post on the island of Java. It was via Java that in 1606 the first consignment of tea was shipped from China to Holland. Tea soon became a fashionable drink among the Dutch, and from there spread to other countries in continental western Europe, but because of its high price it remained a drink for the wealthy.

Britain, always a little suspicious of continental trends, had yet to become the nation of tea drinkers that it is today. Since 1600, the British East India Company had a monopoly on importing goods from outside Europe, and it is likely that sailors on these ships brought tea home as gifts. But the first dated reference to tea in Britain is from an advert in a London newspaper, Mercurius Politicus, from September 1658. It announced that “China Drink, called by the Chinese, Tcha, by other Nations Tay alias Tee” was on sale at a coffee house in Sweeting’s Rents in the City. The first coffee house had been established in London in 1652, and the terms of this advert suggest that tea was still somewhat unfamiliar to most readers, so it is fair to assume that the drink was still something of a curiosity.

It was the marriage of Charles II to Catherine of Braganza that would prove to be a turning point in the history of tea in Britain. She was a Portuguese princess, and a tea addict, and it was her love of the drink that established tea as a fashionable beverage first at court, and then among the wealthy classes as a whole. Capitalising on this, the East India Company began to import tea into Britain, its first order being placed in 1664 – for 100lbs of China tea to be shipped from Java.

sheep’s dung was added to make it look more like tea.

The British took to tea with an enthusiasm that continues to the present day. It became a popular drink in coffee houses, which were as much locations for the transaction of business as they were for relaxation or pleasure. They were though the preserve of middle- and upper-class men; women drank tea in their own homes, and as yet tea was still too expensive to be widespread among the working classes. In part, its high price was due to a punitive system of taxation. The first tax on tea in the leaf, introduced in 1689, was so high at 25p in the pound that it almost stopped sales. It was reduced to 5p in the pound in 1692, and from then until as recently as 1964, when tea duties were finally abolished, politicians were forever tinkering with the exact rate and method of the taxation of tea.

7 million lbs annually was smuggled compared to a legal import of 5 million lbs!

One unforeseen consequence of the taxation of tea was the growth of methods to avoid taxation – smuggling and adulteration. By the 18th century many Britons wanted to drink tea but could not afford the high prices, and their enthusiasm for the drink was matched by the enthusiasm of criminal gangs to smuggle it in. Their methods could be brutal, but they were supported by the millions of British tea drinkers who would not have otherwise been able to afford their favourite beverage. What began as a small time illegal trade, selling a few pounds of tea to personal contacts, developed by the late 18th century into an astonishing organised crime network, perhaps importing as much as 7 million lbs annually, compared to a legal import of 5 million lbs! Worse for the drinkers was that taxation also encouraged the adulteration of tea, particularly of smuggled tea which was not quality controlled through customs and excise. Leaves from other plants, or leaves which had already been brewed and then dried, were added to tea leaves. Sometimes the resulting colour was not convincing enough, so anything from sheep’s dung to poisonous copper carbonate was added to make it look more like tea.

Tea taxation played it’s part in one of the most seismic upheavals in the history of the British Empire .. the American War of Independance.

On December 16, 1773 one of the most an iconic events of American history occured, The Boston Tea Party. It was a direct action by colonists in Boston, a town in the British colony of Massachusetts, against the British government and the monopolistic East India Company that controlled all the tea imported into the colonies. On December 16, 1773, after officials in Boston refused to return three shiploads of taxed tea to Britain, a group of colonists boarded the ships and destroyed the tea by throwing it into Boston Harbor. It also helped trigger the War of Independence … so who knows if the Tax on Tea had been removed earlier whether the USA would be part of the Commonwealth today and the history of the two World Wars might have bene very different indeed!

By 1784, the government realised that enough was enough, and that heavy taxation was creating more problems than it was worth. The new Prime Minister, William Pitt the Younger, slashed the tax from 119 per cent to 12.5 per cent. Suddenly legal tea was affordable, and smuggling stopped virtually overnight. However this was too little too late late for the American colonies as by this time the American War of Independance was over.


Tea Trading and Consumption – the era of the Tea Clippers

The end of the East India Company’s monopoly on trade with China 1834 had an important result, which was more dramatic though less important in the long term: it ushered in the era of the tea clippers. 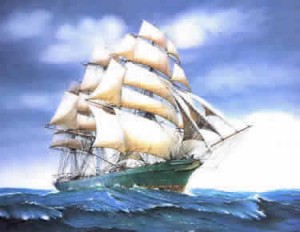 While the Company had had the monopoly on trade, there was no rush to bring the tea from China to Britain, but after 1834 the tea trade became a virtual free for all. Individual merchants and sea captains with their own ships raced to bring home the tea and make the most money, using fast new clippers which had sleek lines, tall masts and huge sails. In particular there was competition between British and American merchants, leading to the famous clipper races of the 1860s.

The race began in China where the clippers would leave the Canton River, race down the China Sea, across the Indian Ocean, around the Cape of Good Hope, up the Atlantic, past the Azores and into the English Channel. The clippers would then be towed up the River Thames by tugs and the race would be won by the first ship to hurl ashore its cargo at the docks. But these races soon came to an end with the opening of the Suez canal, which made the trade routes to China viable for steamships for the first time.

In 1851, when virtually all tea in Britain had come from China, annual consumption per head was less than 2lbs. Bt 1901, fuelled by cheaper imports from India and Sri Lanka (then called Ceylon), another British colony, this had rocketed to over 6lbs per head. Tea had become firmly established as part of the British way of life. This was officially recognised during the First World War, when the government took over the importation of tea to Britain in order to ensure that this essential morale-boosting beverage continued to be available at an affordable price. The government took control again during the Second World War, and tea was rationed from 1940 until 1952.

Tea bags were invented in America in the early twentieth century, but sales only really took off in Britain in the 1970s. Nowadays it would be hard for many tea-drinkers to imagine life without them. Such is the British enthusiasm for tea that even after the dismantling of the Empire, British companies continue to play a leading role in the world’s tea trade and British brands dominate the world market. With recent scientific research indicating that tea drinking may have direct health benefits, it is assured that for centuries to come there will be a place at the centre of British life for a nice cup of tea.


Q: Are we now a coffee drinking nation?
A: No, the number of cups of coffee drunk each day is estimated at 70 million.


Q: Who is the largest per capita tea drinking nation?
A: Republic of Ireland followed by Britain.


Q: What percentage of British tea is consumed from a tea bag?
A: 96%.


Q: Do green and black teas come from different plants?
A: No, they both come from the same plant known by its botanical name Camellia sinensis.


Q: Does tea contain the same level of caffeine as coffee?
A: No, at least half the level of coffee.


* answered by the UK Tea Council