In a Nutshell :  Because Napoleon Bonaparte was left handed. *

* To be fair this is only part of the reason. We explain fully below. 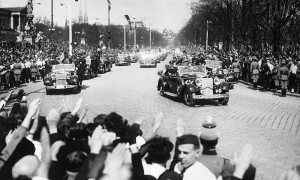 When the Nazis marched into Austria on 12 March 1938, Hitler ordered all of Austria to switch to driving on the right.

The Romans enforced a traffic system where vehicles and riders approached each other on the left as did the people in the Middle Ages.

The reason was quite simple: as most people are right handed approaching another person, especially when mounted, meant that your sword arm was free to meet any potential attack.

So, back to Napoleon. Napoleon was left handed and so for him approaching oncoming traffic on the right hand side would leave his sword arm free. As a lot of Western Europe, with the notable exception of Britain, came under Napoleonic conquest and control they enforced the rule that traffic should flow on the right hand side of the road.

So the new ‘rightism’ was extended to the Low Countries (Belgium, the Netherlands and Luxembourg), Switzerland, Germany, Poland and many parts of Spain and Italy. The states that had resisted Napoleon kept left – Britain, the Austro-Hungarian Empire and Portugal.

An official keep-right rule was introduced in Paris in 1794

However, this is not the complete picture. The origins of enforcing right hand sided traffic actually slightly pre-dates Napoleonic rule and goes back to the French Revolution. The Revolution was determined to turn absolutely everything from the old order on its antithesis, from the dating system to the the driving laws which were changed to “keep right.”

Before the Revolution, the aristocracy travelled on the left of the road, forcing the peasantry over to the right, but after the storming of the Bastille and the subsequent bloody terror, aristocrats preferred to keep a low profile and joined the peasants on the right. An official keep-right rule was introduced in Paris in 1794, more or less parallel to Denmark, where driving on the right had been made compulsory in 1793.

Today about a 35% of the world population drives on the left, and the countries that do are mostly old British colonies.


So whilst Napoleon did more to promulgate a right handed traffic system he was merely ,conveniently for him, continuing on where the French Revolution left off.