Why does time go forward?

In a Nutshell : Time goes forward because you can’t unspill milk or unshatter a glass.

An odd question and an even odder answer … let’s explain …

One of the great mysteries of physics is why time’s arrow points forward. The arrow of time is an idea thought up in 1927 by British physicist Arthur Eddington, who used it to describe how time seems to move in only one direction. You can move from the past into the future, but not back the other way. If space and time together make four dimensions, time is the only dimension in which you must travel in one direction.

If space & time together make 4 dimensions, time is the only dimension in which you must travel in one direction

All of the equations that physicists use to describe the universe, such as ones dealing with gravity and electromagnetism, work perfectly well in either direction.They are said to be symmetrical, and they don’t seem to be affected by the direction of time’s arrow. Yet time does have an arrow – why should this be?

The answer is the second law of thermodynamics, which says that entropy always increases. Entropy means disorder or unusable energy. In a closed system, disorder will always increase. Think of this in terms od probabilities. For example there’s only one way that all the molecules in your body can be arranged in such a way that makes you, you ie in an ordered way. But many more ways that they can be arranged in disorder.

In real life this means that if you spill milk from a jug the milk will not leap back into the jug, or if you drop a glass and it shatters, it will not reassemble itself and leap back into your hand. If you ran a film of either of these events you would be able to tell whether it was running backwards or forwards, unlike the symmetrical equations mentioned above. This increase of entropy means that time can run in only one direction. 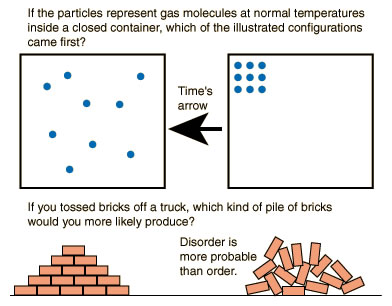 In short Entropy is used to quantify the amount of disorder in a system. As disorder increases, entropy increases. Think of a child’s room after it’s been cleaned. You know that by the end of the week, if they are like most kids, it needs to be cleaned and tidied up again. Statistically speaking there is only a few possible permutations of how the room is arranged that you would consider it to be tidy. However there are far more possible arrangements of the objects in the room that would qualify it as untidy.

For more Chaos and disorder check out our article entitled Chaos and Disorder – or Why does it always happen to me ?

The irreversible nature of the second law of thermodynamics is probably linked to the origins of the universe itself, which started off incredibly small and dense and has been expanding ever since. Immediately after the big bang, the universe had incredibly low entropy, and as time goes on its entropy increases. This is called the cosmological arrow of time.

A possible fate for the universe is that it will eventually become completely disordered with maximum entropy, which means that all matter and energy will become evenly distributed. The available energy would end up spread very thinly across the entire universe, so it would be very cold everywhere, and this fate is sometimes called the heat death of the universe. An alternative fate is that the universe will stop expanding and go into reverse, a scenario called the big crunch. In the big crunch entropy might decrease and time might change direction!