Why doesn’t the Earth’s magnetic north pole lie at the North Pole ? 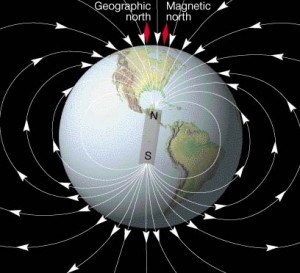 If the fact that all magnetic compasses don’t actually point to the geographical North Pole comes as a shock to you then what we discuss below will blow your socks off, because magnetic north actually moves year by year AND the poles have even flipped in the past; North is South & South is North!

Born Under a Wandering Star

As every Scout knows, the position of magnetic North isn’t the same as true North, nor does it stay fixed. Indeed, its position hasn’t coincided with true North since records began over 500 years ago and until the mid-nineteenth century it was wandering ever further away. Then, about 150 years ago, it started heading back north again, weaving its way among Canada’s arctic islands. Over the last ten years its northward march has accelerated markedly to as much as twenty-five miles a year, bringing it to its present position some 600 miles from the real North Pole at latitude 80 N, 110 West.

What produces it & why does it wander about ? : The explanation for its wandering lies in the processes that create the Earth’s magnetic field, which if truth be told aren’t fully understood. Roughly speaking, the field is thought to be produced by a “dynamo effect”, similar to that which converts the movement of a bicycle wheel into electric power. 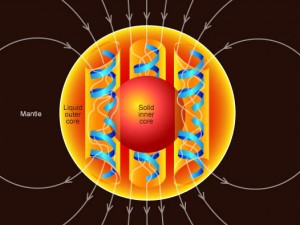 In the Earth, the movement is of vast convective loops of molten iron within the Earth’s hot outer core, 1,800 miles beneath our feet. The slow rise and fall of these loops, together with effects caused by the Earth’s rotation, produces an electric current and with it a magnetic field, akin to that of a simple bar magnet, tilted somewhat to the rotation axis of our planet.

According to this theory, the reason magnetic North does not coincide with true North is because the Earth’s rotation plays only a secondary role in generating the magnetic field, but explaining its precise location is quite another matter.

But why is North at the top & South at the bottom ? : The location of the magnetic poles is the outcome of a constant struggle between the liquid outer core, which is trying to flip the magnetic field right over and the solid inner core, which fights the effect. Every so often, the inner core loses the fight and the Earth’s magnetic field undergoes a complete reversal, with magnetic North becoming South and vice versa.

There is no doubt that, at some point in the future, the magnetic poles of the Earth will flip. Studies of ancient lava, which seals in the orientation of the magnetic field as it cools, show that such reversals have taken place 25 times over the last 5 million years, most recently around 780,000 years ago. The flip takes around 5-10,000 years, during which the Earth is left with little or no magnetic field. According to some scientists, another reversal is (at least in geological terms) imminent. The Earth’s magnetic field has been weakening since around the time of Christ and at current rates will vanish completely within a few thousand years.