Home » Science » Will deforestation eventually cause us to run out of oxygen?

Will deforestation eventually cause us to run out of oxygen? 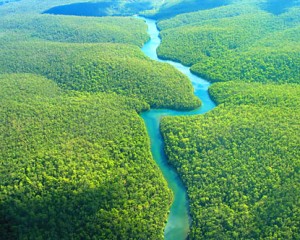 Environmentalists are fond of calling the world’s forests in general, and the Amazon in particular, “the lungs of our planet”, the implication being that unless we stop deforestation, we’re all going to be gasping for breath. In 2002, the environment minister of Colombia went so far as to plead with the world’s cocaine users to give up their habit, because they were promoting damage to the rainforests “that the world needs for its oxygen.”

algae accounts for about 90% of oxygen production

Fortunately (as so often with eco-scare stories), this is the purest bunkum. By far the biggest contributor is the horrible, slimy, thoroughly unphotogenic algae floating like green scum on the world’s oceans, which accounts for about 90% of oxygen production. There are many reasons for being dead against rampant deforestation (or cocaine use, come to that) but the nightmare scenario of a suffocating planet isn’t one of them.