Home » Science » Are We Still Evolving ?

Are We Still Evolving ?

Evolution is an incredibly slow process occurring at both macro and micro levels. Gene mutations, the effects of the physical world around us, such as natural catastrophes, all factor in to changes within a species. However, have our technological, biological and medical advancements to date put us out of reach of evolutions effects, or at least reduced their impact ?

Modern medicine has a huge arsenal of treatments, cures and “work arounds” available to keep us alive and keep us breeding where once our ancestors would have died or where circumstances would have meant that certain family lineages would have petered out. Could this, plus our increasing ability to alter and control our physical environments have pushed us outside evolution?

Simple question, complicated answer. Depending on who you ask, the answer that comes back can be no, yes, yes-and-no, or maybe. So lets have a look at the various answers given by evolutionary biologists.


Are we still Evolving : NO

There has been no biological change in humans in 40,000 or 50,000 years. Everything we call culture and civilization we’ve built with the same body and brain
Stephen Jay Gould Evolutionary biologist

How can this be true. I’ve got blue eyes and light skin, traits thought to have first arisen many thousands of years after we humans left our ancestral homeland of Africa around 50,000 years ago. Don’t such physical characteristics signal that our species has been evolving, even if such traits are only skin deep?

In short, could we really be exactly the same as we were when the ancestors of all of us first spread out from the African continent with their simple stone tools and hunter-gatherer lifestyles?

About 40,000 years ago, as we Homo sapiens were busy replacing Neanderthals in Europe, the archaeological record reveals that a great leap forward took place in our species. We began making cave paintings, jewellery, sculpture, markedly better tools and weapons. And, according to Gould and leading thinkers across many disciplines, from biology to anthropology, our evolution became purely cultural.

We made clothes rather than grew more hair; we crafted better weapons rather than became stronger; we handed down learned behaviours through language rather than discovered them anew. Genetically, these biologists hold, our evolution had all but stopped. 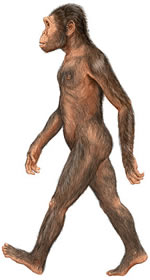 Other geneticists add weight to this argument by arguing that survival in the West no longer depends on a person’s genes. Advances in medicine and technology enable 98 percent or more of all babies born in the United States, Europe, or Japan, for example, to survive long enough to reproduce and pass on their DNA. In the past, natural selection would have weeded out the less reproductively fit, but no longer. Furthermore, Jones says, beneficial mutations dispersed through random genetic drift much more rapidly in the past when we lived in small, isolated groups than they do today in our huge, increasingly intermixed global population.

It has also been noted that the number of offspring that people have in industrialized nations shows little variation. In the past, a single powerful man who procreated with abandon could significantly influence the composition of the human gene pool, at least regionally. In 2003, for instance, researchers at Oxford University identified the Y chromosome of Genghis Khan, whose harems are well-documented, in the DNA of men living today from Mongolia across to Central Asia.

In short we’re becoming more homogeneous and therefore NOT evolving as mutations are being cancelled out.


Are we still Evolving : YES AND NO

When approaching evolution on a global scale it is important to remember that only a small part of the many billions of humans live in environments that are controlled, where health care, food supplies and physical environments are predictable and controllable. To that end mankind it can be argued that as a whole we ARE still being shaped by the world around us ie Macro evolution is still occurring but at such a rate that we cannot easily detect it. Quite simply the amount of time we have spent in a modern environment is a fraction of the amount of time we’ve spent evolving.

That a side, evolutionary psychologists, would argue that psychological traits such as language or memory are the products of natural or artificial selection, and we are therefore still evolving.


Are we still Evolving : YES
some biologists believe that evolution it is actually speeding up

Not only do some biologists believe that we are evolving but would maintain that it is actually speeding up.

Biological evolution, they argue, has sped up since we developed agriculture about 10,000 years ago, a sea change that led to civilization as we know it. The anthropologist Henry Harpending and physicist-turned-evolutionary biologist Gregory Cochran, both of the University of Utah, make this argument forcibly in their 2009 book, The 10,000 Year Explosion: How Civilization Accelerated Human Evolution.

Harpending and Cochran and their colleagues have found that fully 7 percent of our genes appear to be under recent evolutionary pressure. Moreover, they contend, we humans are evolving away from each other.


A Conclusion (sort of )

Hard evidence is needed and speculation, however provocative, only goes so far in science, of course. What everyone wants, what the system demands, is empirical evidence. And the revolution in genomics has started to provide it. However it’s too soon to say for sure. The scientific techniques & technologies are too young at the moment. We’re looking at a snapshot of ourselves, and we’d really have to run the movie for another few thousand years. So, the juries still out.


A Sting in the Tail of this Debate

Of course this still doesn’t answer the question as to why we’re here or even answer the questions about the macro forces at work in the universe ultimately driving evolution. For instance, it is well known that our existence in this universe depends on numerous cosmological constants and parameters whose numerical values must fall within a very narrow range of values. If even a single variable were off, even slightly, we would not exist. The extreme improbability that so many variables would align so auspiciously in our favour merely by chance has led some scientists and philosophers to propose instead the universe has been engineered to suit our specific needs. This is the Anthropic Principle: that the universe appears to have been fine-tuned for our existence.

If this intrigues you then you can read more in our article on The Anthropic Principle.