Coffee – The Revolutionary’s Drink of Choice ?

Did you grab a cup of coffee on your way to work this morning, or drop in to a coffee shop with a friend to gossip whilst savouring the bitter sweet nectar of the that king of all beans the coffee berry ? If you’d done this in the 17th Century then you might have been regarded as either a subversive or a danger to the moral fabric of society. Clearly we need to explain.

Although we British are better known for sipping tea rather than coffee, it still played a major part in British (or certainly English) history as well.

London’s first coffee house opened in 1652 as the nation was recovering from a civil war. Balkan-born Pasqua Rosee began selling his brew after coming across the drink on his travels in the eastern Mediterranean.

It was an immediate success. Within a few years, Rosee was reportedly selling more than 600 coffees a day. Copycat ventures appeared across the city. By 1656 another coffeehouse opened on Fleet Street. Over the next few decades, hundreds more would spring up.

The exact origins of coffee are murky, but most agree that it came from Ethiopia. Tradition says that a goat herder named Kaldi discovered coffee in the 9th century. (you can read more about this in our article “Coffee – buzzy, frothy goodness“) By the 16th century coffee drinking could be found in Persia, Egypt, Syria, and Turkey. Coffeehouses began to appear in cities across the Middle East. The popularity of the coffee houses was unequalled and people frequented them for all kinds of social activity.

So it was that in the 17th century coffee finally began to spread to western Europe, first appearing in Amsterdam and Venice. England was still reeling from the Civil War (1642-1651) when London’s first coffee shop opened.

After the beheading of King Charles I and the replacement of the monarchy with the Commonwealth, coffee’s sobering effects were perfect for the puritan spirit of the time. Unlike ale or spirits, drinking coffee increased lucidity and concentration. No alcohol was served in the coffee houses, nor were women present.

Summary of the text of King Charles’ Proclamation …

“COFFEE-HOUSES … have produced very evil and dangerous effects … many Tradesmen and others, do therein mis-spend much of their time, which might … otherwise be imployed in and about their Lawful Callings and Affairs; but also, for that in such houses, and by occasion of the meetings of such persons therein, divers False, Malitious and Scandalous Reports are devised and spread abroad, to the Defamation of his Majesties Government … his Majesty hath thought it fit and necessary, that the said Coffee-houses be … put down and suppressed, and doth . . . Command all manner of persons, that they or any of them do not presume … to keep any publick Coffee-house, or to utter or sell by retail … any Coffee, Chocolet, Sherbett or Tea …” PROCLAMATION FOR THE SUPPRESSION OF COFFEEHOUSES ISSUED BY KING CHARLES II OF ENGLAND 1675.

Patrons of London’s coffee shops typically sat at long wooden tables with shared candles, pipes , and newspapers. These communal items gave a marked democratic character to many establishments. and men of different social classes could meet and discuss the issues of the day-including’. politics . We would say now that Coffee and coffee houses environment were truly a part of the zeitgeist of that age.

Some coffee shops attracted poets and wits. Scientists from the Royal Society even conducted their learned discussions in such places. This spirit of open, intellectual debate earned coffee shops the nickname “penny universities“.

Coffee also proved to be good for business. It had become part of life for the new professional class responsible for London’s growing wealth and commercial success, giving birth to many important economic institutions. For example, Lloyd’s Coffee House, founded in 1686, became the insurance market Lloyd’s of London. (you can read more about this in our article “From Coffee to Commodities – The London Stock Exchange“)

By the time the monarchy was restored under Charles II (Charles I’s son) in 1660, there were as many as 63 coffeehouses in London.

However, convinced that coffee shops were hotbeds for sedition and plots, King Charles II decided to close them down in December 1675, a move that caused great public outcry. The opposition was so strong that it caused the king to backtrack after only 11 days. To save face, the king allowed coffee shops to stay open for six more months if their owners paid a hefty sum and swore an oath of allegiance. These conditions were by and large ignored, however. The coffee shops stayed open, and the customers continued to gossip and chat.

By the King
A PROCLAMATION,
FOR THE
Suppreflion of Coffee-Houfes. 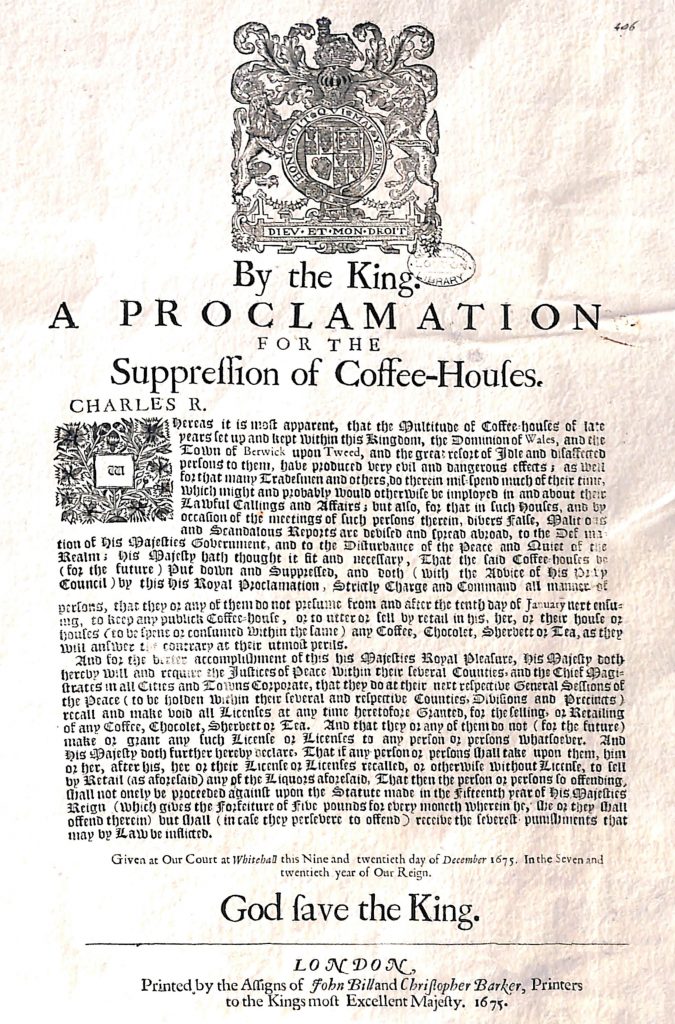 By the King.
A PROCLAMATION
FOR THE
Suppression of Coffee-Houses.