In a Nutshell :  NO – much as you might expect them to (since from a DNA point of view they are identical). The reason lies in the intriguing way that finger prints are actually formed … so READ ON … 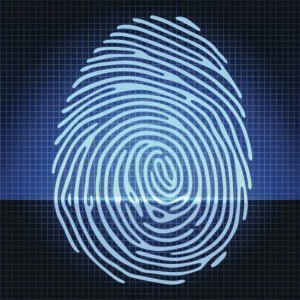 Identical twins result when a fertilized egg splits and the mother carries two separate embryos to term. The key to the creation of identical twins is that the split occurs AFTER fertilization.

The twins come from the same sperm and egg – and thus have the same DNA – ie identical genetic makeup. Because their DNA is an exact match, identical twins will always be the same sex, have the same eye colour and share the same blood type.

‘Fraternal twins’, on the other hand, are born when two separate eggs are fertilised by two different sperms. Their DNA will be no more of a match than any other pair of siblings from the same parents. Not only do fraternal twins not necessarily look that much alike, but they can be of the opposite sex and may possess different blood types.

Even though identical twins share the same DNA, however, they aren’t carbon copies. Parents and close friends can usually tell one identical twin from the other without much difficulty. Their personalities may differ radically. And crucially, for our question, their fingerprints differ. 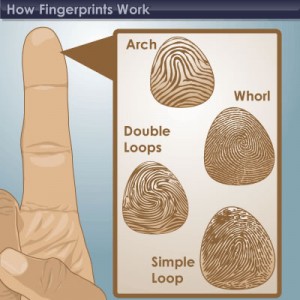 If genetics doesn’t account for these differences, what does? Why aren’t the fingerprints of identical twins, er, identical?

The environment of the developing embryo in the womb has a hand in determining a fingerprint. That’s why geneticists make the distinction between :

‘genotypes’ – the set of genes that a person inherits, ie the DNA     & ‘phenotypes’ – the characteristics that make up a person after the DNA is exposed to the environment.

Identical twins will always have the same genotype, but their phenotypes will differ because their experience in the womb will diverge. In the case of fingerprints, the genes determine the general characteristics of the patterns that are used for fingerprint classification. As the skin on the fingertip differentiates, it expresses these general characteristics. However, as a surface tissue, it is also in contact with other parts of the fetus and the uterus, and their position in relation to uterus and the fetal body changes as the fetus moves on its own and in response to positional changes of the mother.

Influences as disparate as the nutrition of the mother, position in the womb and individual blood pressure can all contribute to different fingerprints

Influences as disparate as the nutrition of the mother, position in the womb and individual blood pressure can all contribute to different fingerprints of identical twins.

In addition the physical differences between twins widen as they age: In middle and old age [identical twins] will look more like non-identical twins.


About two per cent of all births are twins, and only one third of those are identical twins. But twins’ fingerprints are like snowflakes – they may look alike at first blush, but get them under a microscope, and the differences emerge.