Home » General Interest » Elemental Questions : What is Fire Made of ?

Elemental Questions : What is Fire Made of ?

Published on May 20, 2016 in General Interest, Science

Fire – one of the most primitive and yet intriguing of the ‘fundamental elements in our world. Indeed one of the things that differentiates mankind from the rest of the animal kingdom is his ability to make and control fire. This ability is undoubtably the means that has catapulted us into being able to control our environment, to progress, to build, to invent and to create all our incredible technology so …

What is fire made of ? What is its atomic structure? What causes things to burst into flame in the first place and why can’t all materials be made to produce flame ?

Fire involves a chemical reaction between a fuel, which can be either a solid, a liquid or a gas, and atmospheric oxygen. Once initiated it is self-sustaining, generates high temperatures and releases a combination of heat, light, noxious gases and particulate matter. This abilioty to self-sustain is key as that it the means by which how a fire continues after the initial ignition – ie some of the energy released is reused to contine the combustion processes.


WHERE DOES IT HAPPEN ?

The visible flame is the region in which this chemical process occurs and so flame is essentially a gas phase phenomenon. For flaming combustion to occur, solid and liquid fuels must be converted into gaseous form.


WHATS GOING ON INSIDE THE FLAME ? 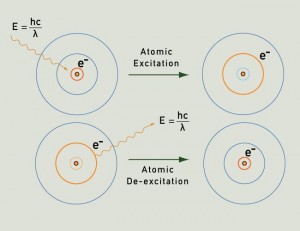 A flame is a region containing very hot atoms. At high enough temperatures all atoms will emit energy in the form of light as their electrons, which have been prompted to higher energy levels by absorbing heat energy, fall to lower energy states (what’s going on here is nuclear physics or ‘quantum mechanics’).

Because this light is emitted in discrete amounts according to the relationship E = hv (where E = energy, h = Planck’s constant and v = frequency), flame colour is related to the magnitude of the quantity of energy which is transformed to light – hence the differnt colours inside a flame

These different colours are most easily be seen with a Bunsen burner. A Bunsen burner that has a choked air supply burns cool, the light emissions from carbon atoms (that are inside the gas being burned) are relatively low in energy and appear more red or orange. However, when the Bunsen is allowed air so that combustion is complete, the flame is hotter and the light emitted is of a higher energy and frequency and appears blue.


HOW DOES IT START ?

LIQUIDS : For liquid fuels this is achieved by evaporative boiling – heating the liquid so it turns into a gas ie evaporates.

SOLIDS : For solid fuels/ the solid is chemically decomposed through the process of pyrolysis to generate volatile gases.

Pyrolysis is a thermochemical decomposition of a solid. For organic substances, in general, it produces gas and liquid products and leaves a solid residue richer in carbon content.


WHAT DETERMINES THE SHAPE OF A FLAME ? 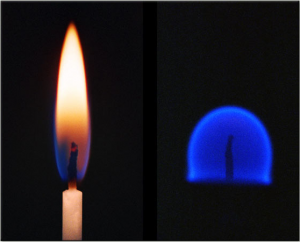 Flame shape on Earth Compared with that in Space

The luminescence of a flame is only half the story. The structure of the flame region is important to understand too. The flame area in a normal combustion environment, such as an open-air bonfire, is structured by convection currents which form as hotter, lighter air rises and allows cooler fresh air to replace it. It is this channelling effect and movement of air that shapes the dancing flames. It is interesting that in space, in zero gravity, the hotter and cooler air cannot move by convection, so flames take on weird shapes and may be stifled by their own combustion products.